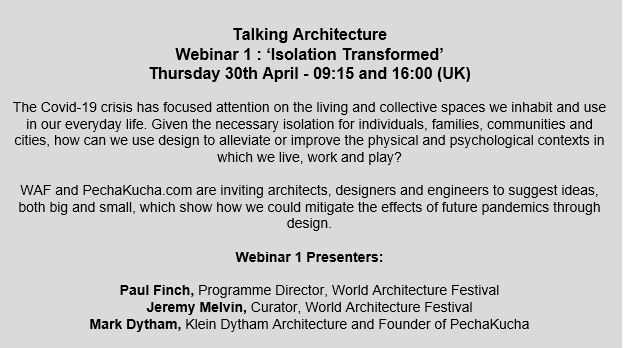 WAF is teaming up with our friends at PechaKucha to launch a competition, ‘Isolation Transformed’, thinking about the post-Covid world, writes Jeremy Melvin.

The ideas competition seeks to unleash the creative potential of the architectural, design and city-making communities to consider how our environments might help to address the effects of pandemics. We are looking in particular for creative thinking that stems from the condition we find ourselves in which might not have emerged in more normal circumstances. In other words, we are looking to learn and find real benefit for architecture from the measures deemed necessary to defeat the pestilence.

In the Middle Ages epidemics spawned new building types and some of the best art and architecture of their time, when art, architecture and spiritual sustenance were about all that was on offer to victims. Recognising that technology and pharmacology have transformed treatment out of all recognition, we would like to explore the potential for the current plague to act as an analogous spur to creativity.

​REGISTER FOR THE FREE WEBINAR HERE

Unless we have the second and third waves of infection from Covid-19 which some experts are predicting (one has expressed the view that there could be up to eight in the UK), it is probably too late to do much about the current pandemic. But whether the same pathogen or ones as yet undiscovered, such episodes are almost certain to occur. We are lucky that some of the more recent examples, such as SARS and Swine Flu, turned out to be far less devastating than the much-trumpeted ‘worst case scenarios’. We may not be so fortunate in the future.

What, though, can designers do to help? We are told by experts that the only way to deal with the disease is a vaccine, which may never be developed. Whether or not the quality of lab design for vaccine producers could speed this up in any way is unproveable and unlikely. Much more certain ground is the benefit of a well-designed environment on those suffering from the effects of the virus, including those sick enough to need hospital treatment, the uncounted legions who are mildly ill and dealing with the condition at home, and on the repercussions for those who live with them.

One of our competition jurors, Dame Laura Lee, the chief executive of Maggies – the charity for cancer sufferers founded by Charles and Maggie Keswick Jencks – has shown that architecture can have a beneficial psychological effect, helping people to absorb advice on managing their condition, encouraging social contact and fostering palliative activities from gardening to cooking and art appreciation.

There is a long history of architectural proposals to facilitate healthcare which accelerated as medicine became more technical and sophisticated in the 19th century. The famous ‘Nightingale wards’ in UK hospitals are among the most notable. They inscribed in architectural form the belief of their namesake Florence that disease festered in poorly ventilated and poorly lit spaces, addressing this via cross-ventilation and sunlight penetration. The formula was replicated numerous times and some are still in use. Nightingale was also the force behind another 19th century health design innovation, the pre-fabricated hospital. Initially conceived by the engineer I K Brunel and fabricated by the redoubtable railway contractor Morton Peto, who was made a baronet for his efforts and generosity.

A century later, as the creation of the National Health Service transformed the quality and reach of healthcare in the UK, various leading architects like Philip Powell (Powell & Moya), and their erstwhile employee Richard Burton (who later co-founded Ahrends Burton & Koralek), made significant contribution to the efficacy of healthcare architecture and its environment. Powell devised a standard template that became the norm for large hospitals in the UK, while Burton adapted the template for the low-energy, art, light and delight-infused St Mary’s Hospital on the Isle of Wight. That both were fine architects meant their hospitals were much more satisfying than those by medical experts like Watkins Grey or Llewelyn-Davies, Weekes, Forrestier-Walker & Bor, whatever technical and operational marvels they achieved.

But most people will not be sick enough to go to hospital. There are billions (4.5 billion according to the BBC) who may not or never will be ill, but who still find their lives impeded by lockdowns of varying severity. Almost every aspect of their lives has been impoverished, most significantly the potential to improve their lot through work or education, and their scope for enjoyment from any form of social contact or leisure activity. What can the design of our environment do for anyone in these conditions? This situation is the focus of the competition.

For example, is it possible to devise simple, elegant and cost-effective interventions in the outdoor environment that may enable and encourage exercise while setting conditions for social distancing? Many shops in London are spray-painting lines on the pavement outside them at 2m intervals to help shoppers waiting in queues to maintain the specified ‘cordon sanitaire’. Could they be made into permanent features without being inelegant afterthoughts?

Also, could queuing be turned from a chore to an opportunity – with transparent window fronts that allow people outside to see what is on offer and where it is in the shop? What about other points where people might naturally congregate such as bus-stops or park benches? In the 19th century furniture designers managed to design benches that allowed courting couples to sit in close proximity without provoking alarm from their chaperones. Could similar ingenuity be employed in designing benches that keep people an adequate distance from each other, though still able to communicate?

Similarly, many masterplans for large developments now consider walking routes and other opportunities for exercise, as part of the need to deal with inactivity and obesity. How could this line of thinking be extended to facilitate social distancing? Would this affect how designers think of sun and shade, ventilation and perhaps planting? All of those could help to impair spread of infection.

Then there is the internal environment. A need may emerge to change fundamentally our living spaces so they can accommodate workspace as well, especially as many companies may be reluctant to provide expensive desk space as of right to all their employees. Obviously this trend has been ongoing for some time, as businesses seek to cut cost by cutting property costs, but Covid-19 may well accelerate this. 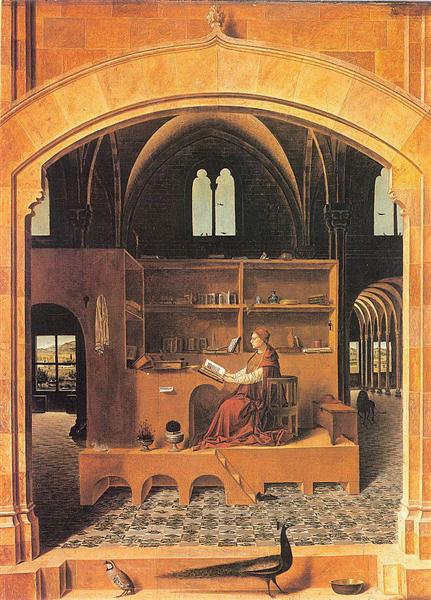 Antonello da Messina, 'Saint Jerome in his Study' from the collection at the National Gallery, London

Last year the British Council for Offices published a report into flexible working written by the present author (WAF curator Jeremy Melvin) and the architect and workspace specialist Andrew Chadwick (available at www.bco.org.uk) Many architects have shown great ingenuity in adapting awkward, more or less unusable spaces in conventional terms into home offices, such as the desk Allford Hall Monaghan Morris with engineers Dewhurst Macfarlane created in the stair void at the top floor of a conventional London terraced house. According to its client, then living alone, it was an ideal place to work, isolated from the rest of the flat with all its diversions, comfortable to use and comforting to inhabit. 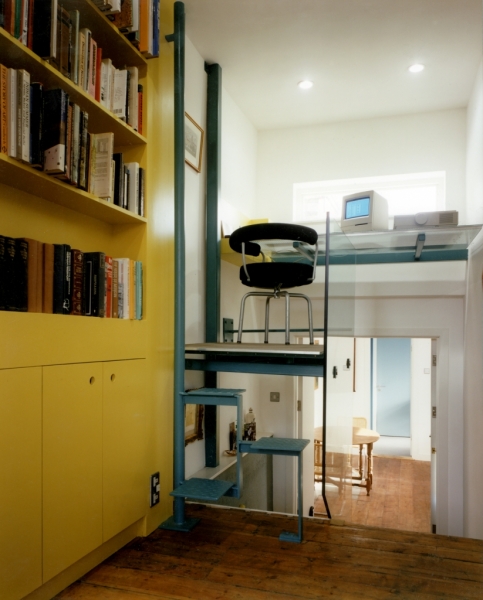 As in that example, such solutions could relate to the scale of product or industrial design. Furniture makers from Ikea to Vitra all offer desks, chairs and storage units for home-working, though many in effect need a room to be designated as a study or office. We would be delighted to see clever design ideas that unlock awkward spaces or allow more conventional areas/volumes to be doubly or triply used.

All of these possibilities present their own approaches to the numerous psychological effects of working and living in isolation. How they might be overcome, assessed and offset is a key part of what this competition is about. Dealing with such strains and stresses should remind us that design, at any scale, is holistic. Identifying and solving one problem or set of them exists within a context, and ideally suggests solutions to other problems. In that sense designing for isolation is a part of design, though by focusing on how we overcome isolation as a primary goal, we hope that new thinking which could infuse new approaches to design will emerge. If so, some good may come out of this sorry situation.

All entries will have to be submitted in the PechaKucha Create platform, which takes the principles of the PechaKucha format, familiar to many WAF delegates, of 20 timed images (20 secs each), and adds a voiceover lasting 400 secs. More information on PechaKucha.com.

We are assembling a strong and expert jury to judge the competition. Dame Laura will be joined by architects Sunand Prasad, Ralph Johnson and Sharon Davis. Prasad, a former RIBA president, grew up on Gandhi’s Ashram before studying architecture at Cambridge and subsequently working on many inventive and low-cost medical buildings. Johnson is the longstanding head of design for Perkins + Will and a familiar face at WAF, where he won the completed buildings Medical category for the Rush hospital in his native Chicago. Davis has also won categories at WAF for socially engaged architecture, most recently for a clever proposal to bring modern healthcare to a remote part of Nepal. Nigel Coates, international designer and creative director of INSIDE, the interiors festival that runs alongside WAF, will also be a juror alongside representatives of WAF and PechaKucha. And we are delighted to welcome our latest judge – Peter Exley, president-elect of the American Institute of Architects.

Competition registration will open on 1 May. See the WAF or PechaKucha website for further information.