‘This is a movement about movement’, says Kim Nielsen, founding partner of Danish architects 3xNielsen, referring to the International Olympic Committee headquarters his firm has designed. Murmurs of assent emanate from colleagues and IOC staff who hear it. 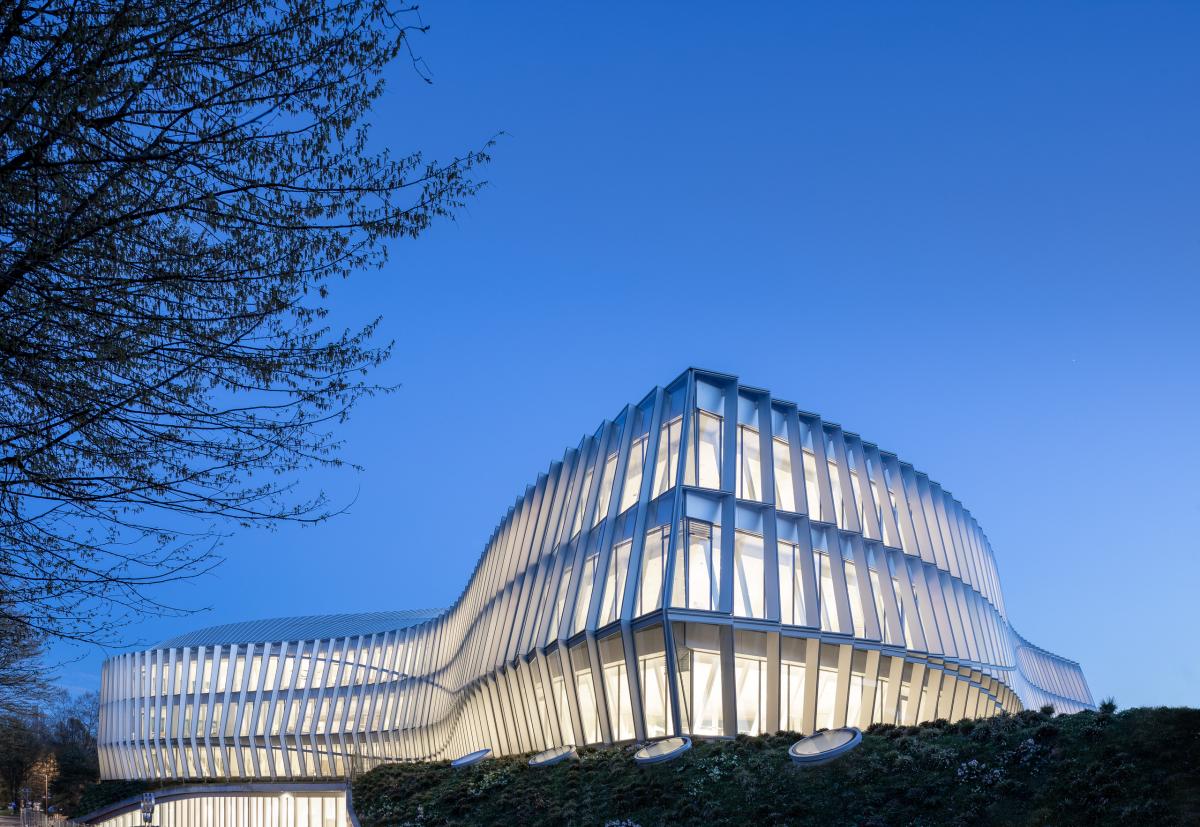 The building’s serpentine façade is a series of similar modules, each angled to appear slightly different to, though in logical sequence with. its neighbours. This recalls the effect of Edward Muybridge’s photographic frames of athletes in motion. Inside is a dramatic, five-ringed staircase leading invitingly to each floor. It refers to the five Olympic rings, an immediately recognisable device, and a continual reminder for staff of the ‘Olympic values’ of peace, tolerance, respect and solidarity. The skeleton staff in occupancy at the time of my visit, preparing for the full opening on June 23, speak enthusiastically about the movement the new hq builds into their lives – some of them walk up the equivalent of 20 flights of stairs a day for the sheer pleasure of using the staircase rather than the lifts. 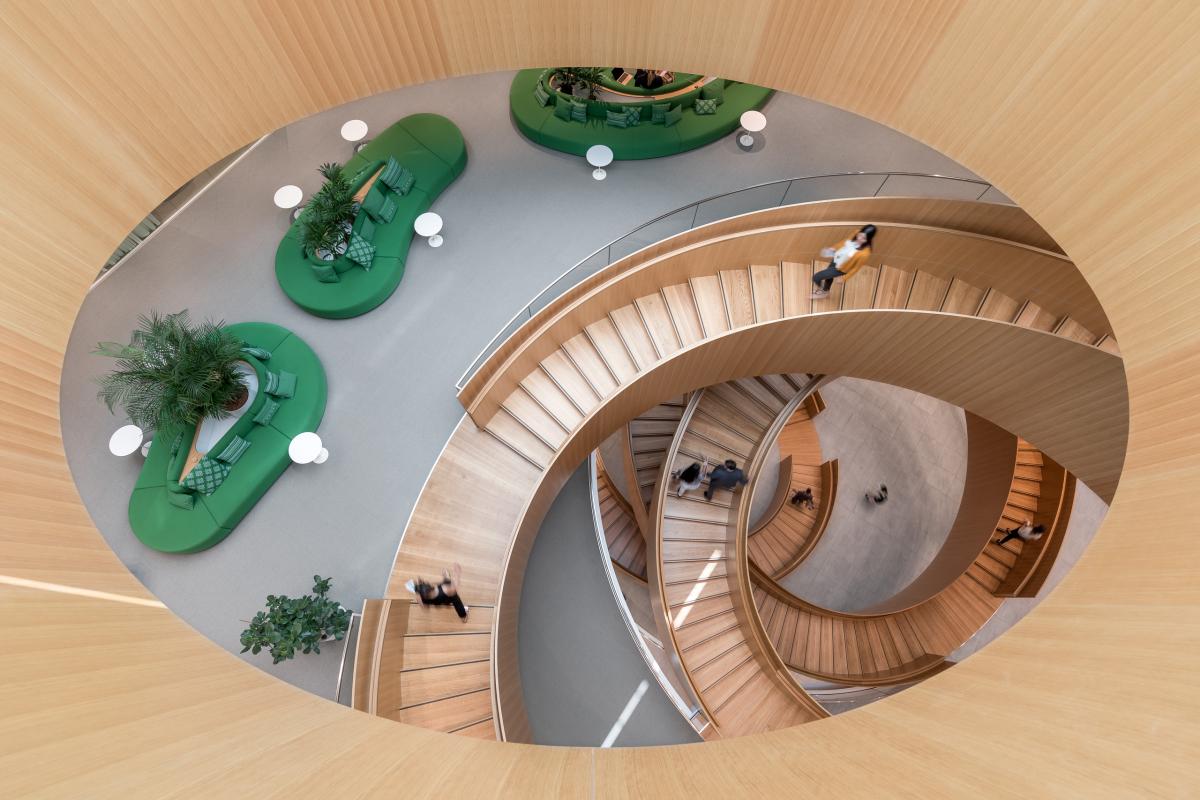 The five-ringed staircase makes a dramatic centrepiece and orientating feature to the interior, encourages staff to move and brings light into the relatively deep plan 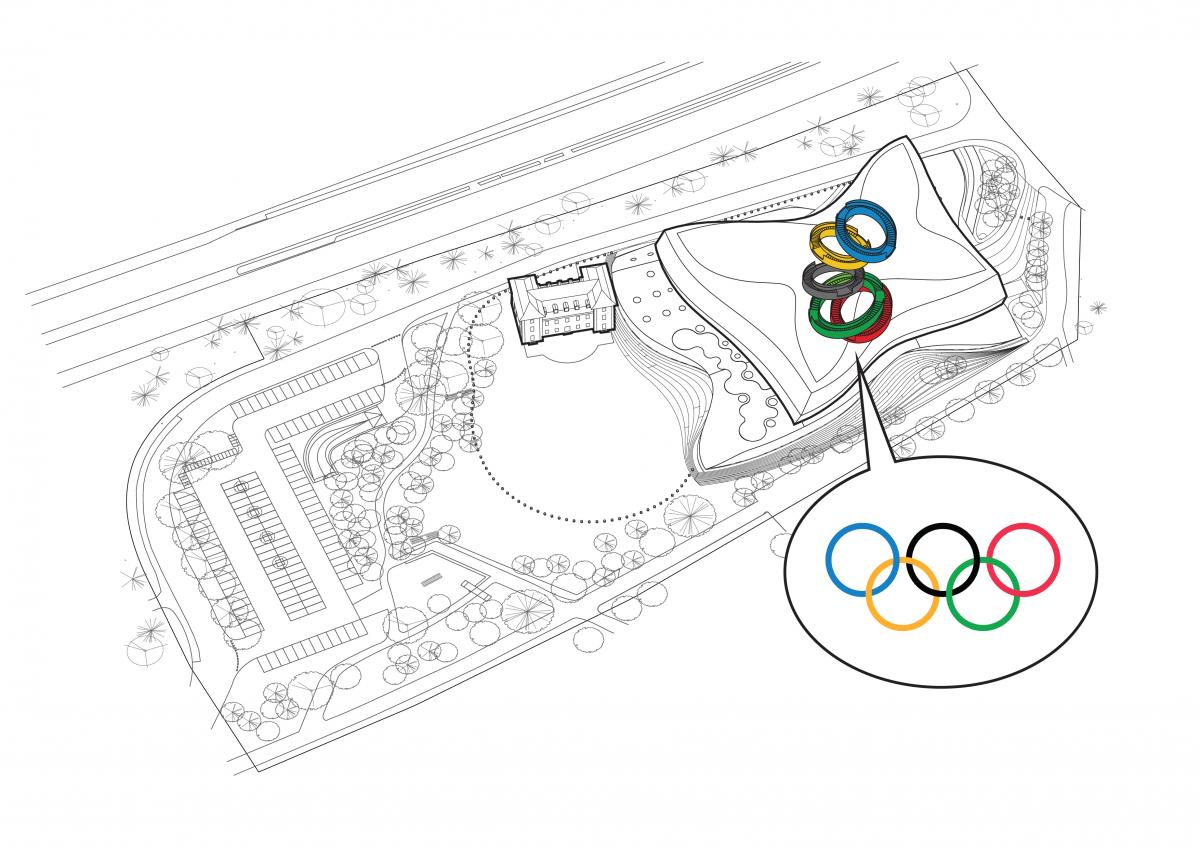 The staircase is based in the Olympic motif of five rings

Baron Pierre de Coubertin, founder of the modern Olympic movement, gave a wider context to Nielsen’s point: ‘Olympism is a philosophy of life, awaiting and combining in a balanced whole the qualities of body, will and mind. Olympian seeks to create a way of life based on the joy found in effort, the educational value of good example and respect for universal, fundamental, ethical principles.’ A statement with not entirely consistent echoes from Darwin, Alfred Marshall and that prevalent figure in early 20th century intellectual life, Nietzsche.

It is a heady mix for 3XN to distil into a symbolic architectural vocabulary, as well as achieving the functional goals of the 550 workplace, 145m Swiss Franc building. A hush comes over my hosts from the IOC and 3XN as we await the President of the IOC, Thomas Bach, a German lawyer who won a fencing Gold Medal for West Germany at the Montreal Olympics in 1976. (Wikipedia suggests he should be referred to as ‘His Excellency’, though they address him as ‘President’. I opt for ‘Mr President’ as it sounds less Latin-American-dictator while remaining, I hope, appropriately respectful.)

Bach speaks of the excitement he shares for the new headquarters with his colleagues and design team. The previous building on the site had workspace for 200-300 people and consequently IOC employees were split across five locations in Lausanne, with all the complications of managing multiple offices. Inside it is light and transparent, with views to the outside from almost every point. ‘Credibility’, Bach believes, 'includes transparency’. So the new building should make Bach’s managerial task more efficient, an important achievement for an organization that passes on 90 per cent of its revenues to sport development.

Coubertin had moved the IOC to the tranquil Swiss city of Lausanne in 1915, away from war-torn Paris, to stress its neutrality. He envisaged Lausanne itself, with its enviable setting looking across Lake Geneva to the Alps, becoming a beacon for Olympic values. It would have the IOC headquarters, an Olympic Museum – a dream finally realised in 1993 and re-opened after a major overhaul in 2013 - and draw in other international sporting federations. So far around 50 have based themselves in Lausanne, inscribing sport into the local economy to the tune of 250m Swiss Francs annually, and four times that to the Swiss economy overall. Much of what the IOC does is to forge some common purpose between many of those federations and 206 international Olympic committees, so collaboration is built into its ethos. Five new sports will be added for 2020: skateboarding, climbing, surfing, karate and softball.

Setting out a series of values, explains Bach, is important. He enthuses about the Olympics 2020, a 40-point programme, intended to address some of the criticisms which has arisen of international sporting federations in the last couple of decades. Built around three core principles of credibility, sustainability and youth, it aims to draw out more of the good such a movement can do – with some pride he cites the joint North and South Korean team at last year’s Winter Olympics – than the power it might accrue. These values inform the new building in far more ways than equating the transparent floor-plates with credibility. Stressing sustainability in the new HQ, for example, puts the IOC in a ‘stronger position to get organizing committees [for individual Olympiads] to be sustainable. ‘If you want to put your values in a fast-changing world you need to be creative,’ he continues, mentioning a recent conversation with the Pope about refugees where they both agreed on the need for creative solutions. 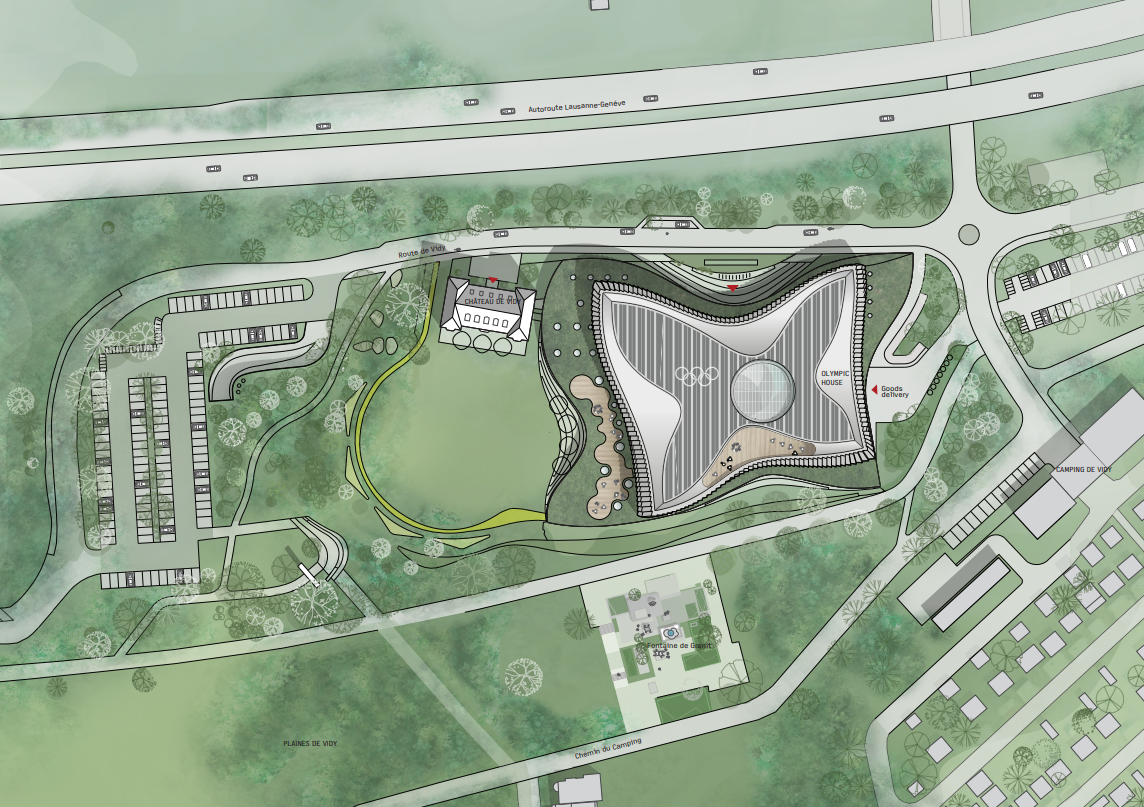 The new building occupies the site its predecessor in Lausanne

So when 114 architects expressed interest in designing the new IOC headquarters, Bach and his colleagues were looking for creative approaches. He was surprised – especially given the IOC’s commitment to sustainability – that only 3XN proposed to lever the new building into the old. With input from the Ecole Polytechnique Federal de Lausanne, ultimately 95 per cent of the old building was recycled, from reusing the foundations to donating the white goods to deserving organizations.

The 3XN practice structure brings a particular twist to creative, collaborative working. Visiting their studio, a pair of converted naval boathouses in the Copenhagen harbor, reveals much about how they work. Here, despite various pieces of structure, one can see how their experience of open-plan working informed the IOC design. With plenty of daylight coming through the roof – a series of double pitches with valleys between them – it feels transparent and inviting. Models abound, for presentation and studies of building elements, but many are small explorations of different shapes and forms.

Among architects, model-makers, technical experts and visualisers, you find a smattering of other disciplines such as anthropologists and economists. Infusing these skills into early design thinking helps to interrogate a brief from many different angles, allowing a greater depth of understanding than most architects enjoy about what clients really need. Rapidly made small models are preliminary and provisional explorations into how analysis might be translated into form, to some extent as an antidote to the endless discussions that social science can generate.

3XN quickly understood the agenda that Bach recaps. The new building had to be more than a mere functional structure. It had to set exemplary standards and convey the message of Olympics 2020, with a visual language that expressed motion and connected to the interests of youth. 3XN senior partner Jan Ammundsen takes up the story. The key success, he says, is that they took from the brief the need to find the nerve of the organization and to make a story about it. He adds collaboration as a vital part of sport, alongside movement. Their design blends the two, in the transparent working areas, but also in numerous meeting points which spin off from the five rings of staircase. These create, through the movement the encourage, encounters between colleagues which germinate the seeds of new ideas. Nowhere is far from a coffee station and relaxed seating areas, both open to view and more private. 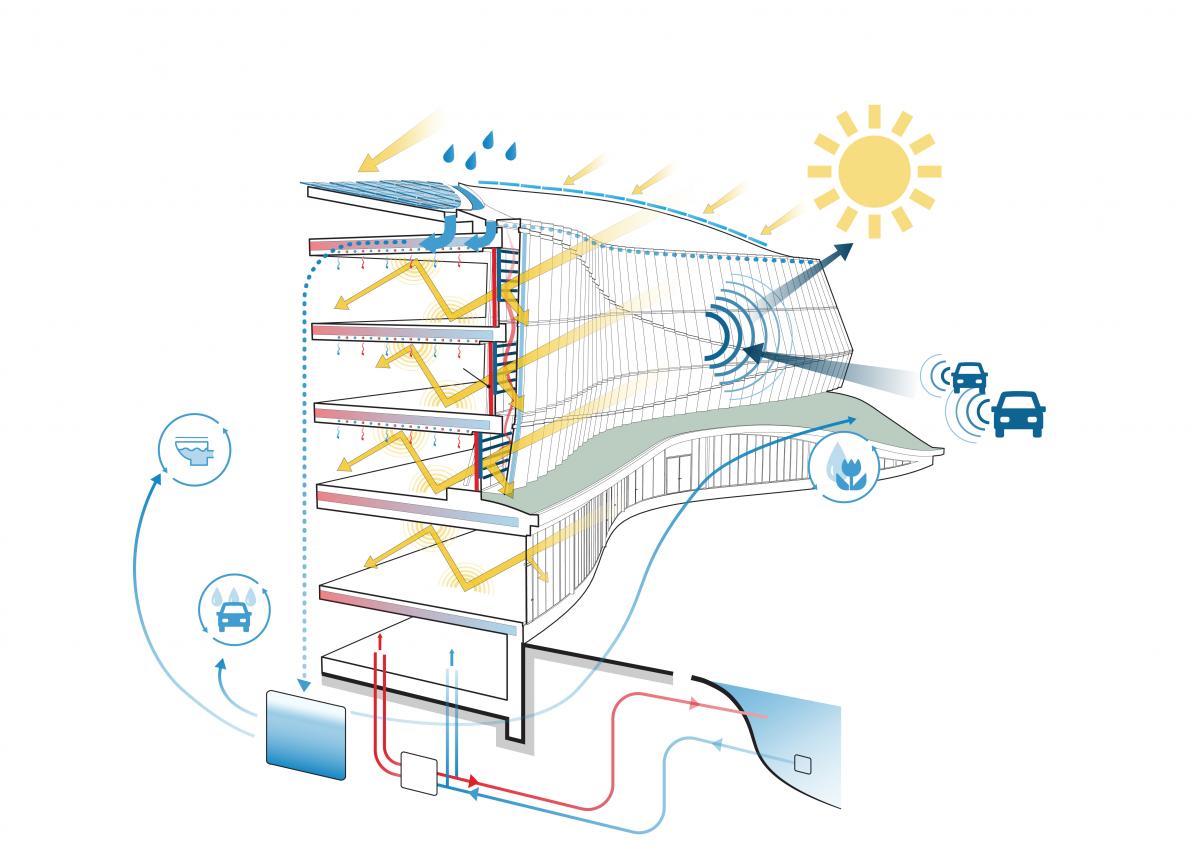 Sustainability goes far beyond recycling the former building. Ammundsen explains it as ‘lots of small pieces put together’. Daylight cascades down the stairwell and the perimeter is carefully controlled – the façade modules are a complex three-dimensional construction with shading and insulation. Concrete provides thermal mass and the lake itself provides a heat sink. On the roof is an array of pv cells. All this provides up to a 35 per cent reduction in energy consumption. Similarly, rainwater harvesting and recycling reduces water usage by 60 per cent.

Perhaps the hardest requirement of the brief to solve, reflects Ammundsen, was the need for flexibility. ‘Every column had its own discussion’, he recalls, though once they were placed a ceiling grid could be set out to allow different positioning of the glass partitions. Designing open-plan office spaces and making them interesting is difficult, he acknowledges.

To address this, each floorplate is slightly different with its own curves and set-backs, making the facade curve vertically as well as horizontally. An animation shows how these various layers combine as a composition, ‘experiments in land and building form’ as Ammundsen terms them. The effect, with landscaping brought up the plinth, is to make the building seem a hybrid of metal, glass and plants, as if by some alchemy nature has transformed into artifice, and despite being stationary itself, holding out the promise of flow. How appropriate, for a movement about movement. 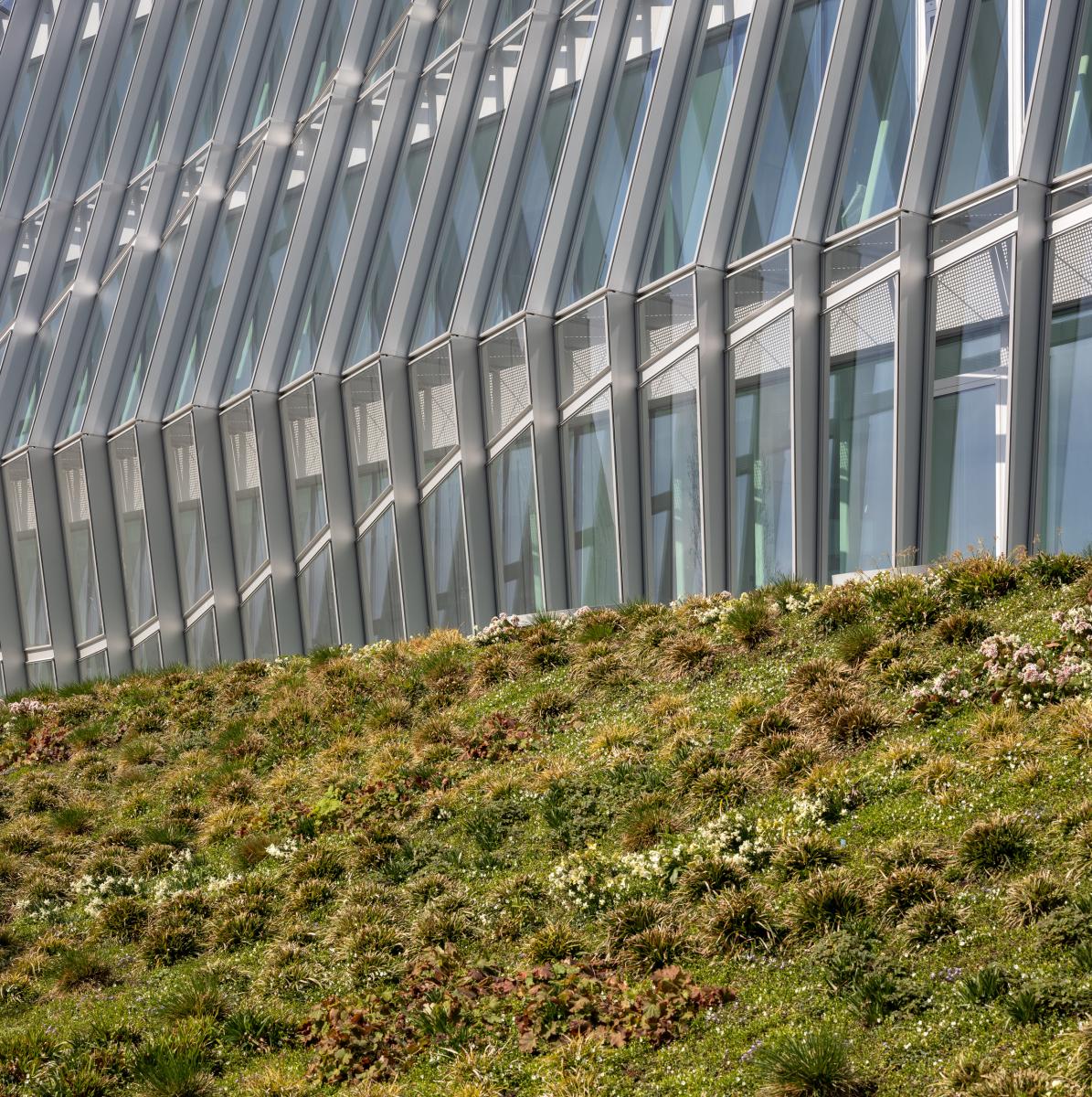 Nature, in the form of a planted bank, comes right up to the facade, partly to express a relationship with nature and partly for security​