After reviewing some of the most shocking pieces of curatorial imbecility over the last few months, it is a delight to turn to some highly intelligent examples of the interaction between architecture and curation. First was Grimshaw’s Arter Foundation in Istanbul, which I believe is one of the most imagination instances of architecture being used to present art, where the inherent qualities of architecture of light, space, form and route offer numerous and varied ways for curators to make exhibitions. Next up in this happy sequence is the second Orleans Biennale, entitled ‘Years of Solitude’ on until Jan 19.

Curated by the director of Orleans’ FRAQ Centre Abdulkader Demani and Luca Galofaro from Rome’s MAXXI, it has created an ‘archipelago of solitudes’ within a ‘landscape of solitude’ which flows throughout the city – whose ‘islands’ are its main street, its churches and church crypts and other locations both obvious and concealed. ‘Solitude is not loneliness’ Demani stresses. These installations and exhibitions are individually curated, which poses the formidable intellectual challenge of holding these ‘fragments’ together; this is where the theme of solitude comes in.

Developed from the title of Gabriel Garcia Marquez’s novel One Hundred Years of Solitude, some of the venues are solitary – we stooped through the well concealed crypt of Saint Aignan, for example, to see video installations of distant urban scenes by Ethiopian artist Ezra Wube; some of the featured architects worked for much of their careers in solitude, in the sense of being unknown or deliberately pursuing singular paths; other exhibits were isolated in time and brought back to attention for the Biennale. The common theme is how solitude can be a spur to new ideas, both in an active sense and how we might react when confronted with an object or project recovered from a state of solitude.

One of the most public exhibits runs along the Rue Jeanne d’Arc, one of the city’s main thoroughfares leading to its Gothic cathedral, not quite perhaps in the league of Amiens or nearby Chartres, but impressive nonetheless. The exhibits here are a series of 26 flags, each reflecting on some aspect of the middle east and Arab culture. Curated by Palestinian architect and curator Nora Akawi and including work by Zaha Hadid, it recalls celebrations throughout the city’s history, including, subtly, the occasion when Jeanne d’Arc herself, ‘La Pucelle d’Orleans’, liberated it from an English siege, and even more subliminally, the Arab contribution to Gothic architecture. It is an incisive but non-coercive way that ties together place, history and opens up speculation around cultural reference. 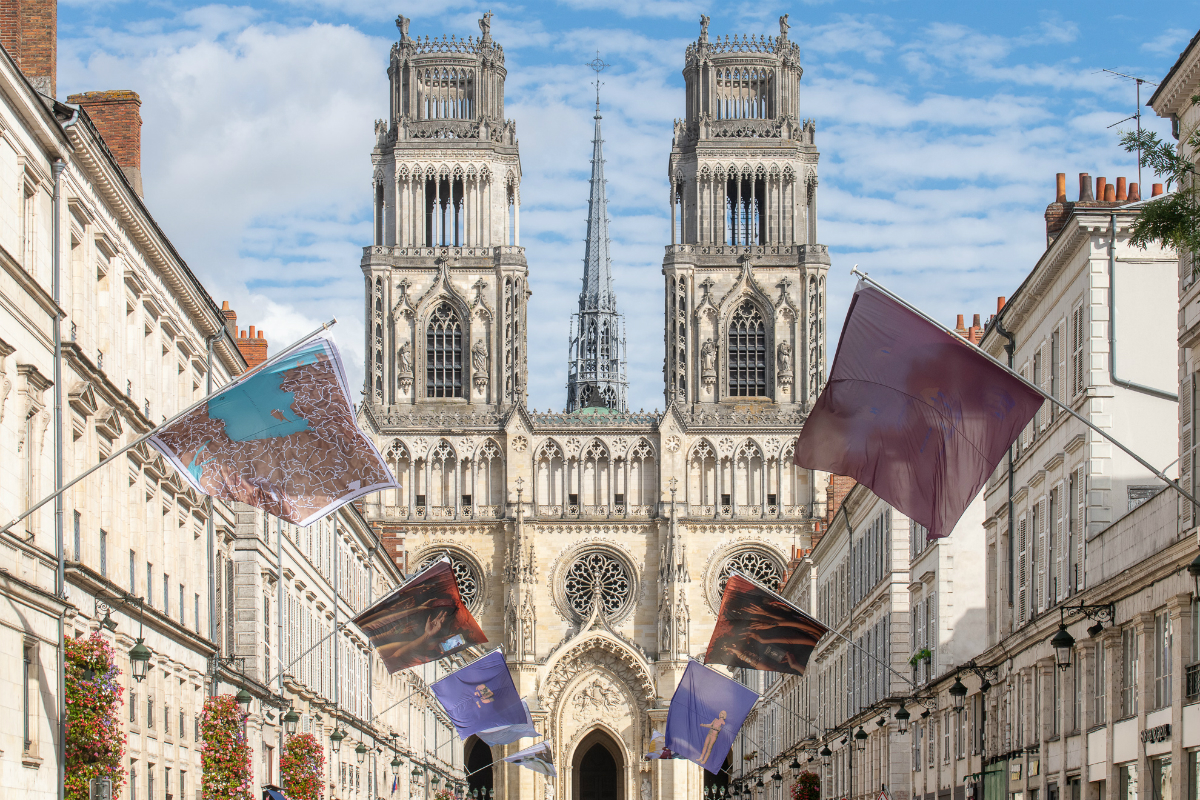 It also moves the frame of reference in space beyond the city and in time beyond the present. This is a vital goal for the curators, to expand the coverage of geographies and generations beyond the normal boundaries of ‘taste’ and fashion. So, for example, the exhibit of several films in the Theatre d’Orleans (an underwhelming Grand Projet of the 1990s), entitled ‘From Solitude to Desolation’ takes us to Mexico, defined via Octavio Paz not as inferior, but with an identity of solitude and difference, depicted against the context of failed state and civic institutions. 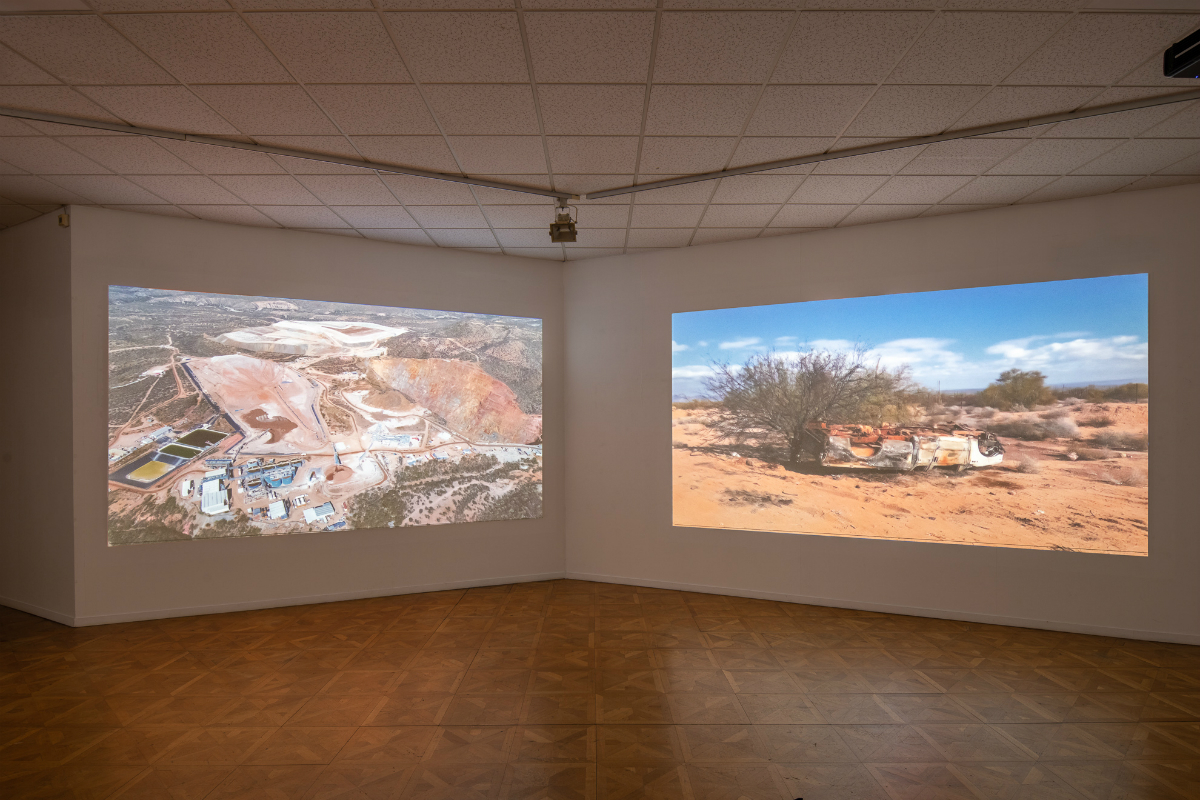 Some of the most interesting exhibits are shown in the Collegiale Saint-Pierre-le-Puellier, a short walk from the cathedral. Its centrepiece features the Brazilian group Arquitetura Nova, the Biennale’s guest of honour, who used architecture to test out social and constructional ideas in the wake of Niemeyer’s Brasilia but before the crackdown by the military government which saw several of their members exiled or imprisoned. Here too, is a typically intriguing exhibit by Lacaton Vassal, a film depicting life in one of their elegantly minimal apartment buildings. 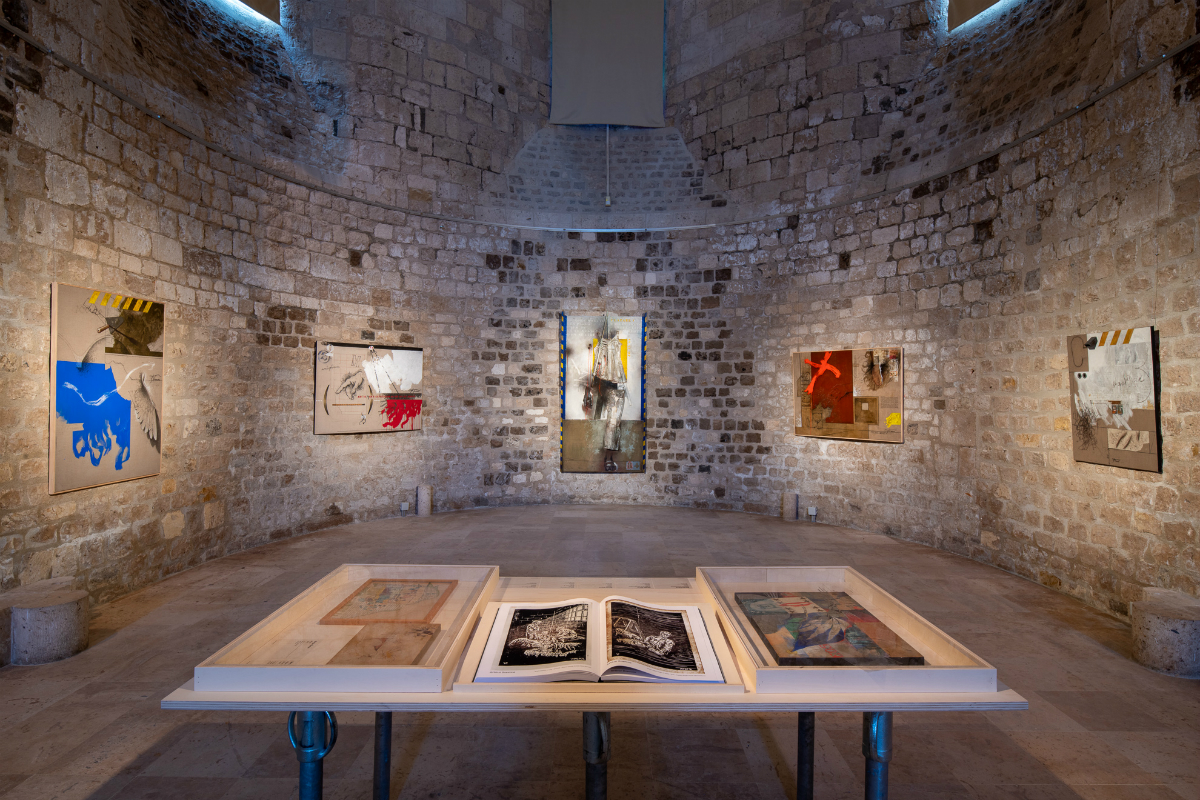 But, like a spider in the middle of its web, is the Frac Centre itself, which both projects and attracts ideas. It had already acquired a large collection of architectural works (the only Frac centre to focus on architecture) before it moved to its present home, a former barracks with an intriguing building by Jakob + MacFarlane in its courtyard, completed in 2013. Much of it comes from the utopian and avant garde experimental architecture of the 1950s and 60s. 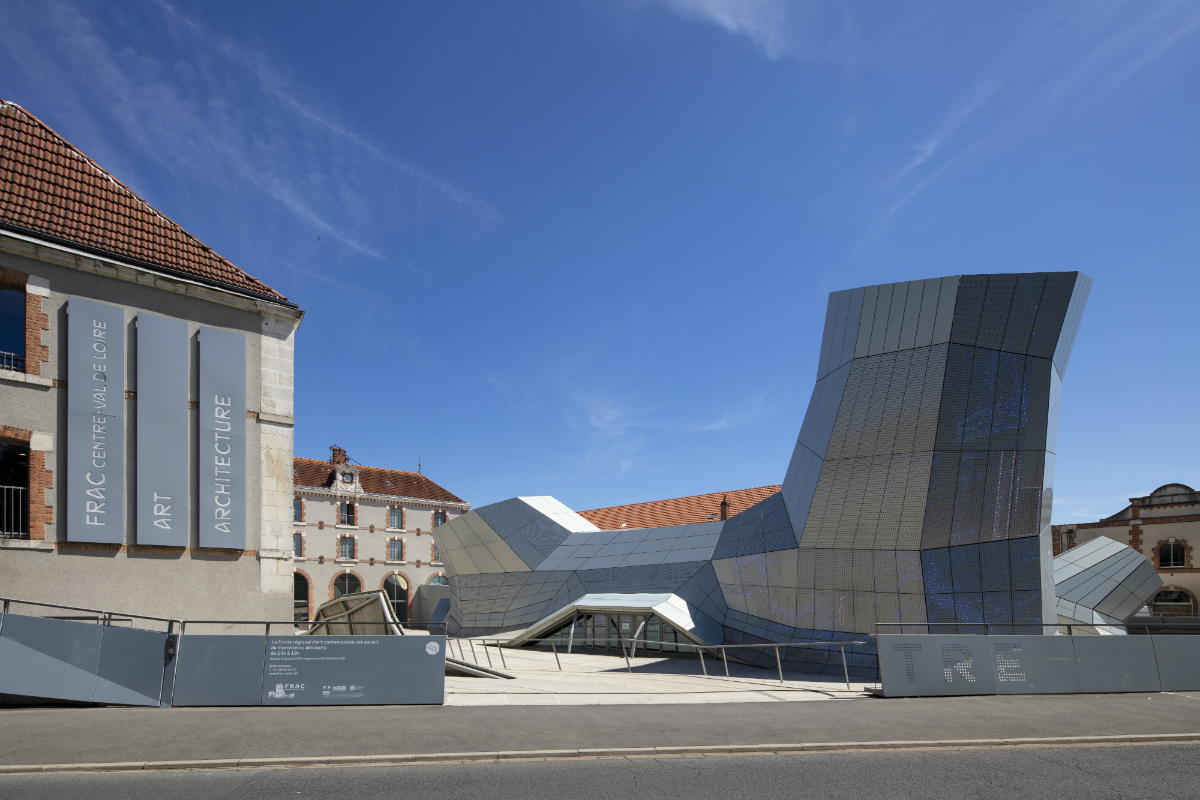 Central to the Biennale is the mission to show some of this material, and true to that there is a magnificent exhibition of drawings by the German expressionist Guenter Guenshel (1928-2008). His work recalls Hans Scharoun’s or Bruno Taut’s early paintings, but goes deeper into the tradition, with allusions to the German romantic idea of a shining city on the hill, surrounded and supported by the most extraordinary and sometimes quite threatening forms. We are in the world of the Bruder Grimm, or perhaps more appropriately to Guenshel’s dates, Thomas Mann’s Doktor Faustus, where good cannot exist without evil. It amounts to a magnificent meditation on the solitude of architectural form-making. 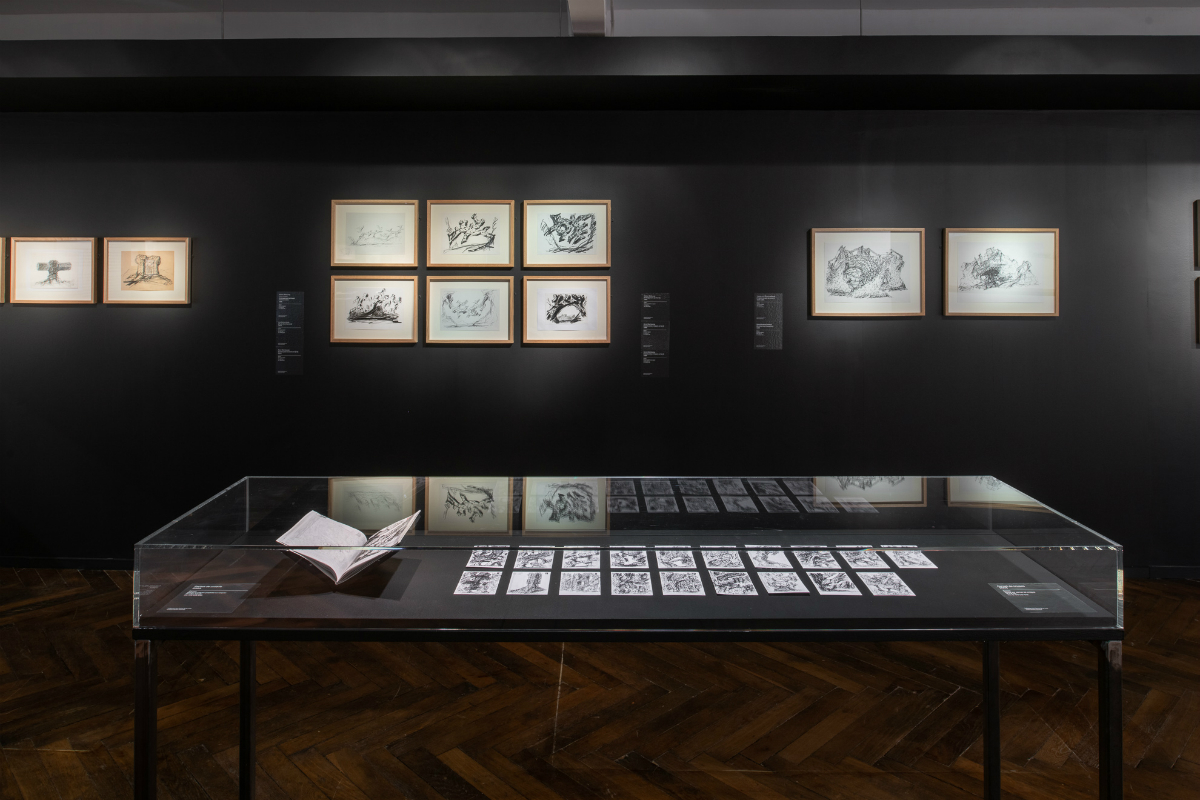 Slightly lighter in theme but still depicting the nostalgia of solitude is another exhibition of housing in Algiers, produced in the twilight of French occupation, by the architect Fernand Pouillon. Daphne Bengoa’s photographs with texts by the architect Bernard Gachet hint at the implications the buildings have for urban morphology, construction and typology, with the political project of Algerie Francaise looming in the background. Solitude, in many senses, lurks here. 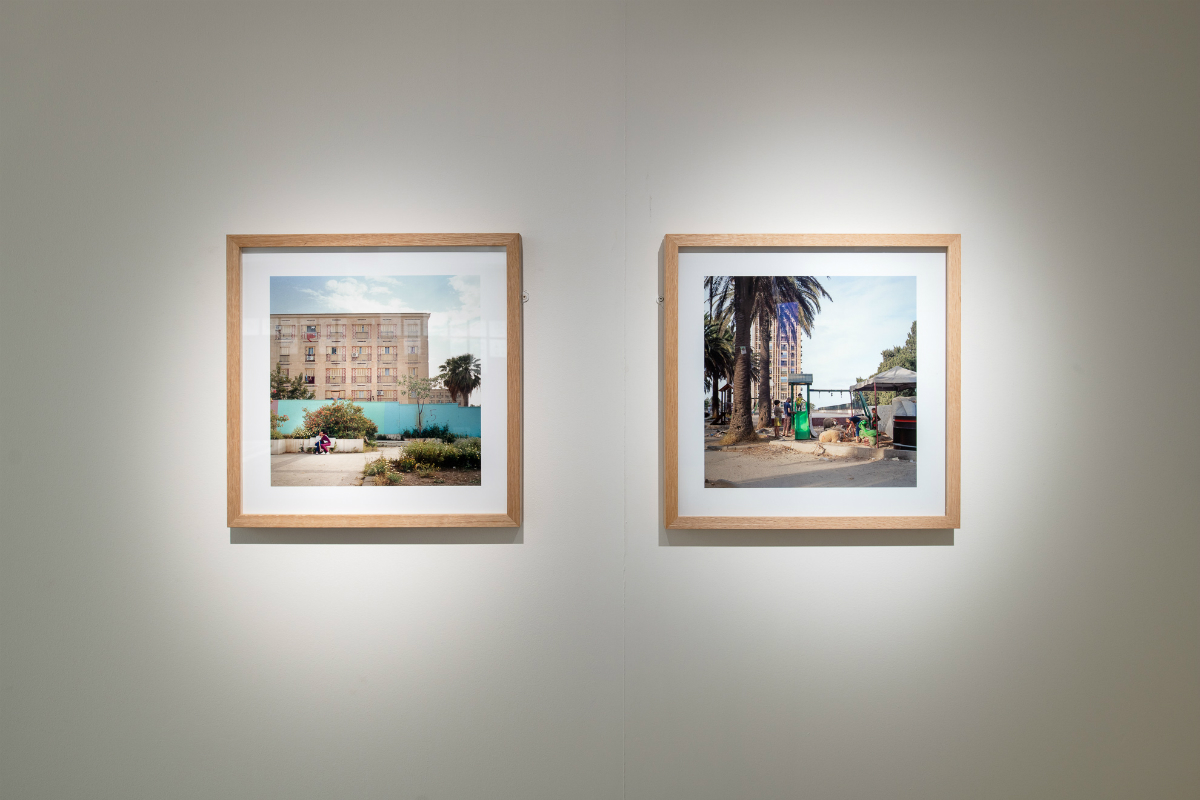 Fernand Pouillon - My Creations will Speak for Me (c) Martin Argyroglo

Also in the Frac centre is an intriguing digital project curated by SCI-ARCH’s head, Hernan Diaz Alonso, The Collective Beast. In it AI continually transforms projects which reflects on the new methods that are changing design: images continually reconfigure on multiple screens, making a cacophony of pictures and visual impressions, a clear analogy with the massive range of potential imagery in design today.

One of the particular pleasures in the curatorial approach Demani and Galofero have devised is the way they have worked their building, their collection and their city, with some shrewd insights and a fine eye for architecture that allows them to spot or revive interest in unfamiliar architectures. This is a privilege denied to other biennale curators, but also a challenge few, I fear, would live up to. And to keep the concept moving forward, almost all the new work in the Biennale will end up in the Frac collection, further reinforcing its near pre-eminence, certainly in Europe, in contemporary and modern architecture, and providing a rich seam of work for future curators to mine.

Visiting on a rainy, overcast autumnal day I felt the prophet Jeremiah’s great urban lament running through my mind: Quomodo Sedet Sola Civitas, Plena Populo? (How does the city sit so solitary which was once full of people?). But when Palestrina set this to glorious polyphony he resolved the idea of solitude into a component of a greater whole. This is comparable to what Demani and Galofero and their associated curators have achieved with Orleans: a rich understanding of architectural ideas and artefacts has allowed them to infuse the city with various examples of solitude which never become completely isolated. In doing so they offer the opportunity to rethink the city – a world heritage site – itself, as well as the nature and purpose of architecture itself.