Our age demands that anyone we commemorate should be, if not exactly Christ-like, at least on a spiritual level with Mahatma Gandhi or Nelson Mandela. The Casa Malaparte and its eponymous owner and co-designer, the colourful avant-garde writer Curzio Malaparte, therefore present a nice little conundrum.

Malaparte was born Kurt Erich Stuckert in 1898, adopting the new name as a riff on Bonaparte which means ‘good side’ in Italian, substituting ‘mala’ or bad for ‘bona’. He designed the house in the 1930s, on the eastern side of the paradisiacal island of Capri in the Bay of Naples, with the architect Adalberto Libera – as a place for Malaparte to serve the house arrest imposed on him by Mussolini’s government. As a formerly enthusiastic fascist this was a bit of a turnaround (Malaparte later embraced the relatively benign Italian Communist Party, a not uncommon volte face among Italians of a certain generation), but it did produce one of the most remarkable homes of the 20th century, and one which still speaks to us now.

This is not just because of its design for isolation. Its remarkable setting would make such a condition at least tolerable and possibly even enjoyable. But how the house was furnished and inhabited provides a fascinating story. Malaparte both selected and designed specific contents for it, and some of the porcelains originally placed in his wife’s room and later in the drawing room, as well as reproductions of three pieces of furniture, a bench, console and dining table, are on display at Gagosian’s Davies Street Gallery in London’s Mayfair (until 19 September). Their production was initiated by Malaparte’s descendant Tommaso Rositani Suckert, and they are available for purchase in limited editions. 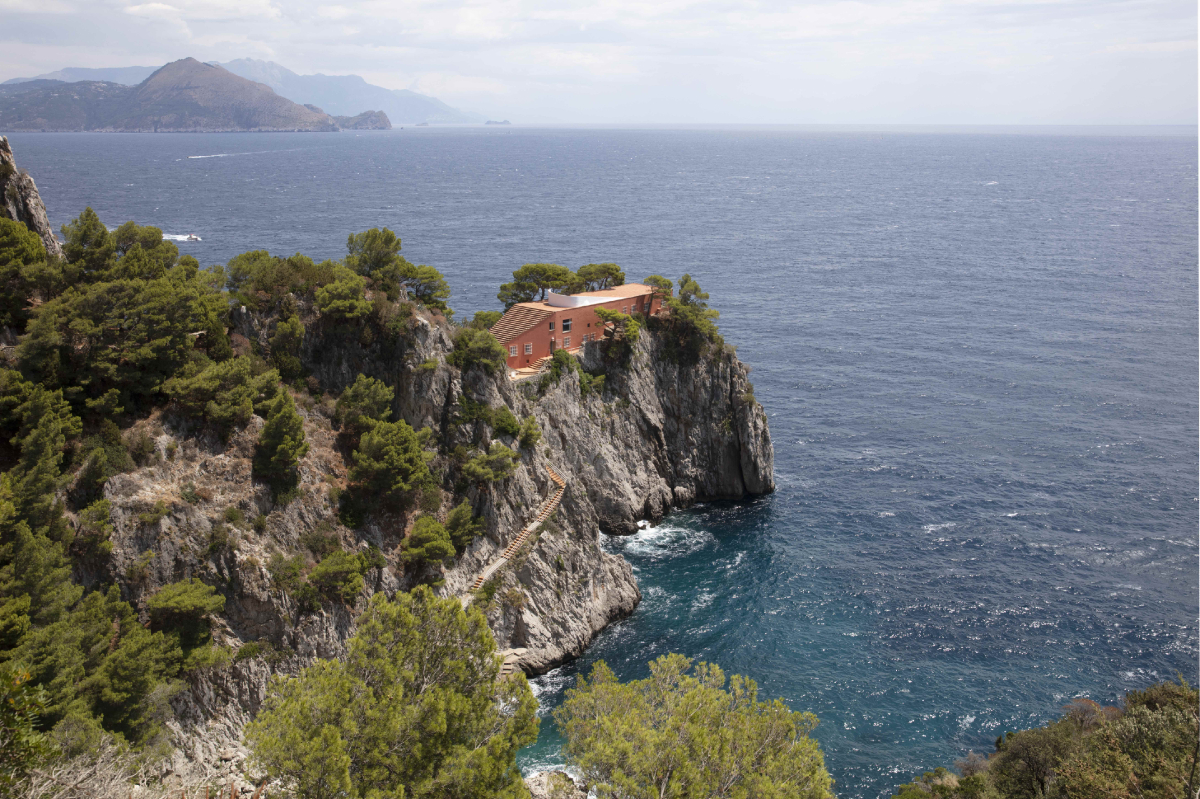 Casa Malaparte, Capri - a house, like its occupier, full of paradox and some strange furnishings. Photo: Sebastian di Persono.

The florid baroque Meissen pieces might seem out of place in one of Minimalism’s most notable monuments. But they help to illustrate Malaparte’s relationship with his wife, encapsulated in a quote on the wall: she is ‘not a creature subject to my destiny, as being dependent on me, but free from the tyrannies of nature [can] help her conquer a freedom and a destiny that nature contests and disputes with it. This very freedom, this very dignity, invented by man to justify the tone of some of his relationships with the physical and moral world, and the world of nature and consciousness. It is on this point and only on this point that I would like my wife to look at me’. That may or may not win favour with feminists, but it is a curious sentiment to encapsulate in rosy-cheeked porcelain mädchen.

His wife’s chamber, the favorita room, was the only one in the house devoted to women. All its other spaces, even its very form and outward appearance, denote an unmistakable masculinity. This is especially apparent in the furniture. These pieces are large in size and massive in presence, though their sophistication grows through observation. They speak of an elemental classicism, contrasted with raw nature. In each case the top is crafted in relatively naturalistic shapes from thick walnut, the pine legs for the table, tufa, a local volcanic stone for the console and Carrara marble for the bench. 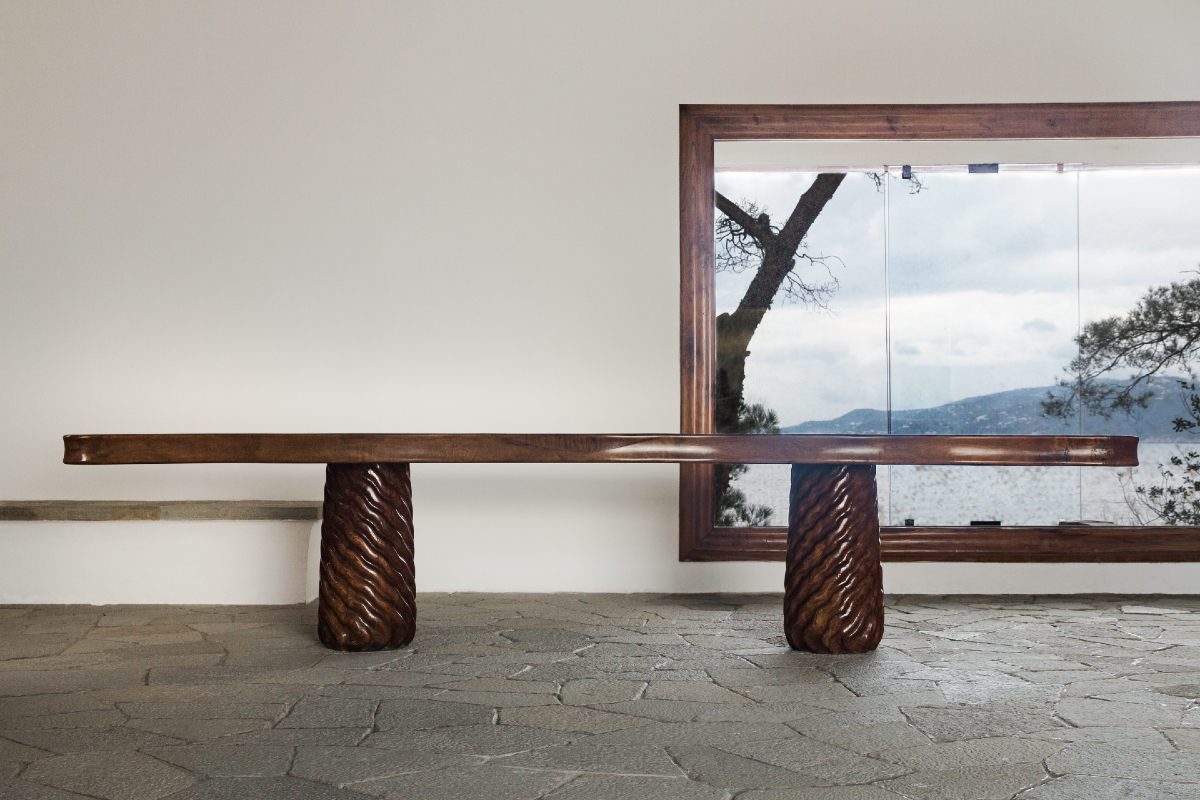 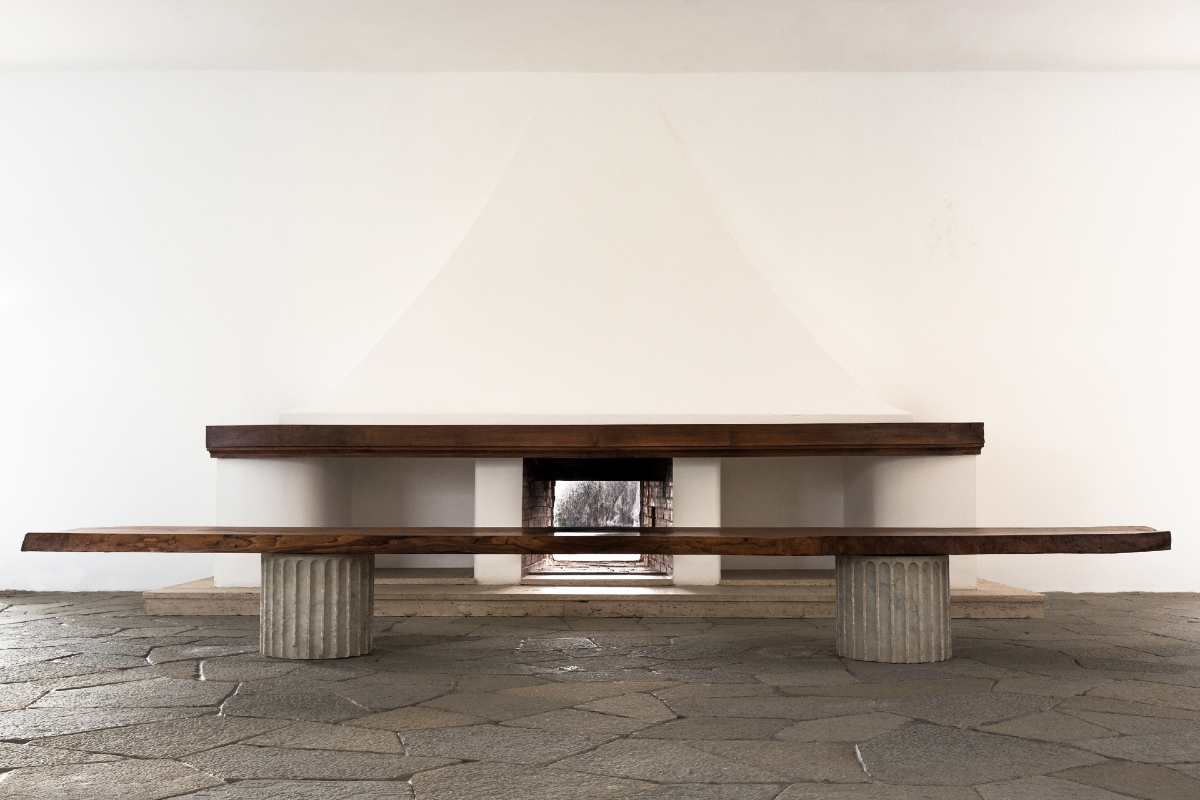 The table legs are shaped in what might be taken, in other circumstances, for an ancestor of the English Jacobean motif of barley twist, while with fluting, though of unrecognizable proportions, the other legs refer to the classical without embodying it. In the shadow of Vesuvius and close to the great, tragic classical sites of Pompeii and Herculaneum, this implied struggle between nature and culture has a strong resonance. 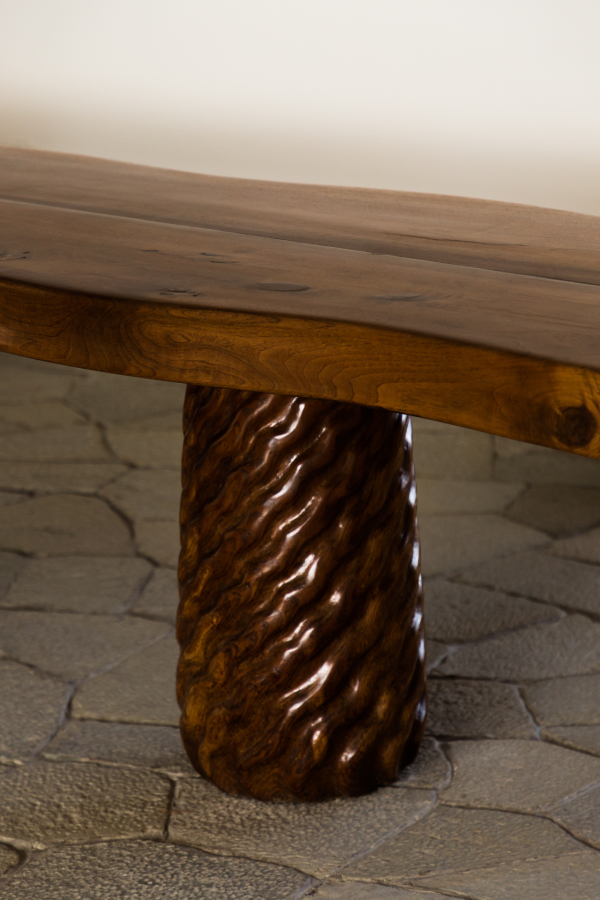 The exhibition makes an interesting though I suspect not wholly successful attempt to capture the internal character of Casa Malaparte, reproducing the dramatic view from the house in a large, walnut-framed photograph, whose placing helps to convey the positioning of the original furniture. But there is really too little contextual information – limited to a few small photographs, tantalizing but incomplete.

Wyatt Allgeier, in an interview with the contemporary Stuckert in Gagosian’s house magazine, summarizes Malaparte as a master of paradox and a provocateur. That fits the impression the exhibition gives of both the house and the man. The furniture with its classical references, and especially the porcelain, is paradoxical in a minimalist setting; the house for isolation was clearly also intended to encourage and celebrate looking outwards and onwards.

Indeed, after Malaparte’s death in 1957, the house had an almost voyeuristic afterlife. For it was a setting in Jean-Luc Godard’s 1963 film ‘Le Mépris’ (Contempt), starring perhaps the most iconic (to a straight male gaze) sex symbol of the mid-20th century, Brigitte Bardot.