POST-COVID FORM - What will continue?

In A Funny Thing Happened on the Way to the Forum, Stephen Sondheim wrote about the attributes of comedy. He could have been describing the characteristics of community. 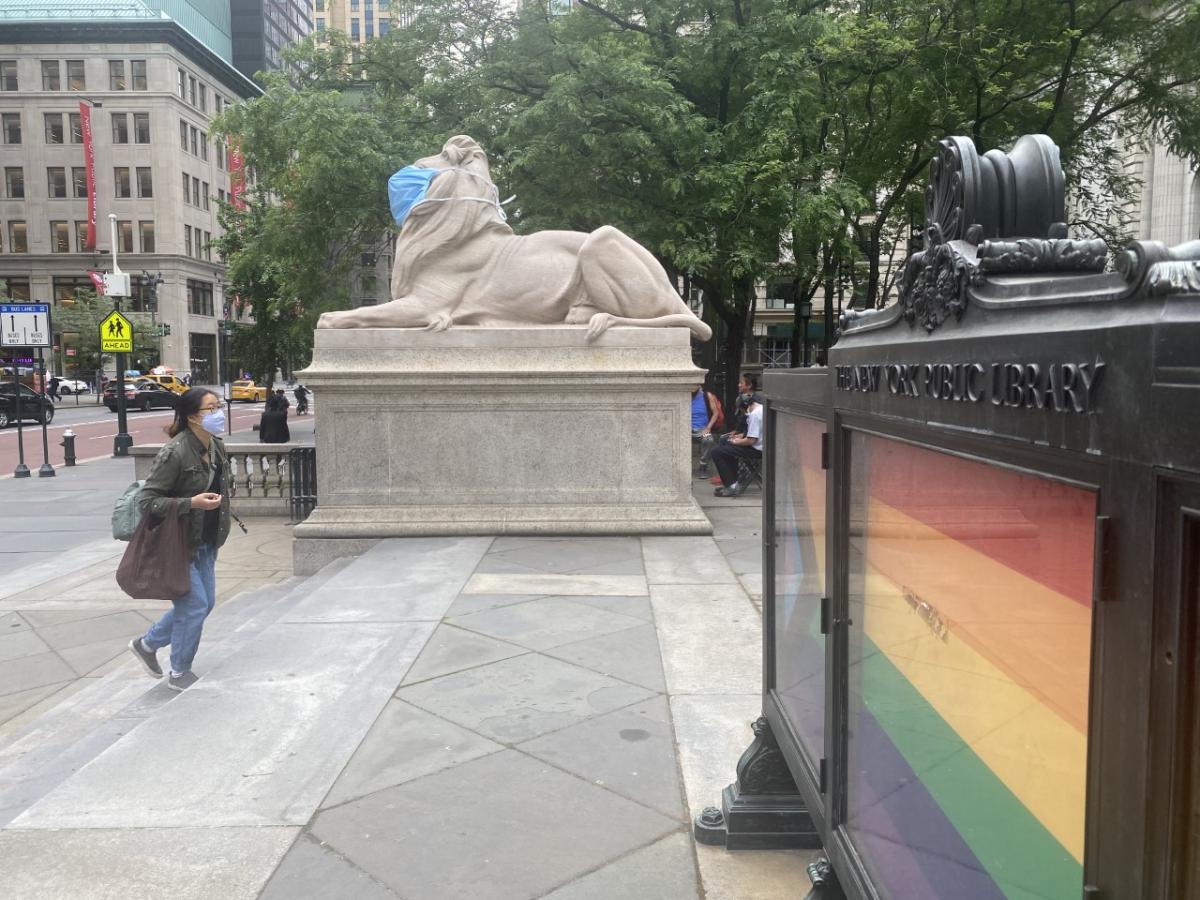 The future of urban form has been transformed by the pandemic. There is a new relation of inside to out, a new concern about social equity and the relation of built form to economic and environmental justice. Trends that were evident before the onset of COVID-19 have been accelerated. But the acceleration, like a New York City subway express, comes to stopping points, places where people can get on or off. Stations on that journey include the wonderfully ubiquitous street seats redefining the balance of who owns the road. We also see much more use of outdoor space at different scales, not just parklets replacing parking spaces, but linear parks connecting neighborhoods, regional parks attracting those seeking more physical exertion, and streets made pedestrian friendly as plazas, with movable seats inviting contemplation and fostering well-being. Green roofs bring outdoor space closer to home and help reduce heating and cooling loads. Urban agriculture, at grade and in the air, reduces the distance of farm to table.

These healthful changes in collective culture were happening before COVID. But just as the 9/11 World Trade Center attack precipitated radical changes in the New York City Building Code, so too has the coming of the coronavirus pandemic to our city changed our sense of vulnerability and recalibrated how we see our city, our neighborhoods, our blocks, and our buildings. A funny thing happened on the way to the World Architecture Forum: architects went outside.

​At the scale of the city, encourage physical activity.

Invested enough in it, anyhow / To each his own / The garden needs sorting out… ‘Cause they know and so do I / The high road is hard to find… (Broken Bells) 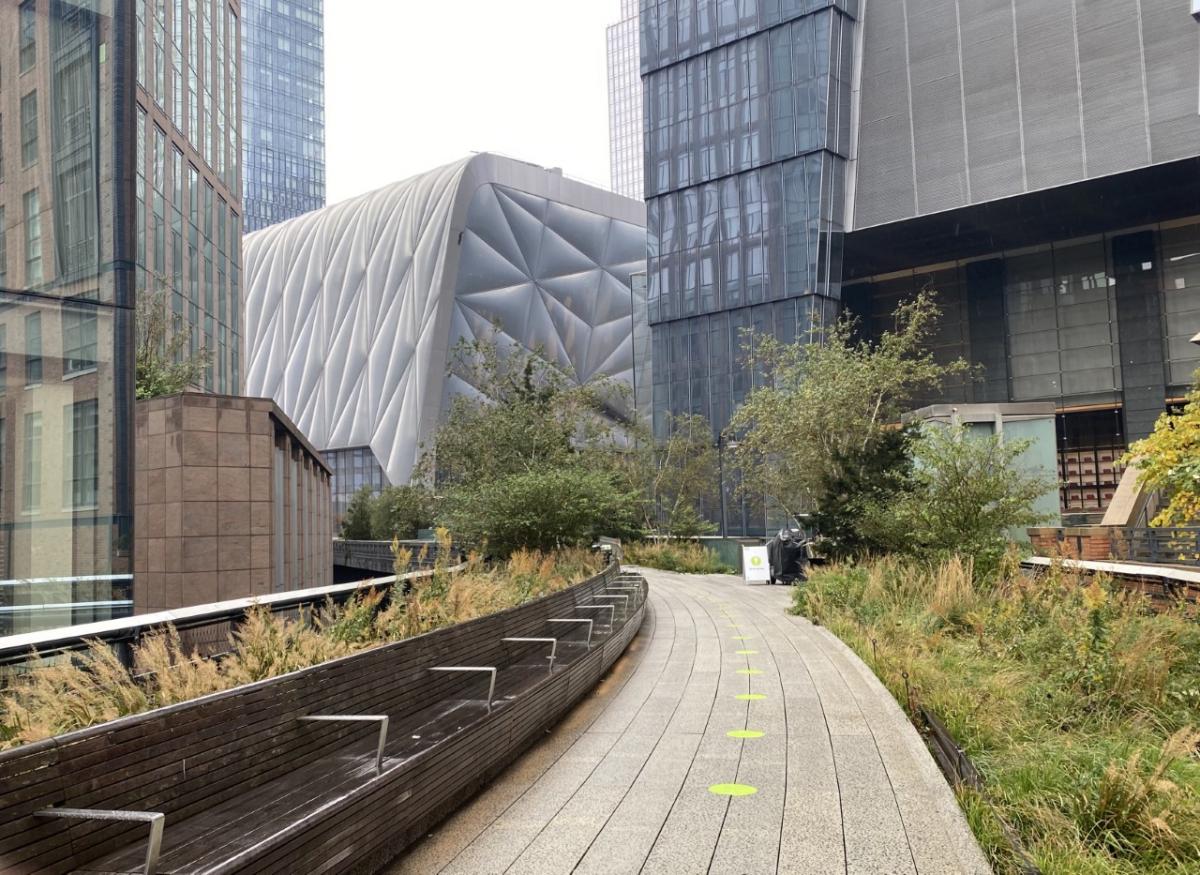 The High Line inspires people to walk. Like the Promenade Plantée which preceded it, the High Line connects neighborhoods. In Paris, the 15-minute city is neighborhood-centric, focused on the provision of decentralized public facilities and services within a one-kilometer radius of a community capitol, often a school. New York is more chaotic, but the traditional ethnic neighborhoods, bounded by previously inviolable boulevards, still have distinct characters. The High Line connects Greenwich Village to Chelsea, to Clinton, and, now, Hudson Yards. A plan to continue the path eastward to the new Moynihan Train Hall and its commuter and long-distance rail has been announced. The High Line resets the fifteen-minute clock.

During the pandemic, the High Line changed. Movement was one-way, south to north, and entry was time-ticketed, like a blockbuster museum exhibition. With tourism down to zero, the millions of annual visitors crowding the path and benches were no longer present. New Yorkers rediscovered, or in many cases, discovered the High Line. Its seasonally changing plants and biodiversity attracted new users.

After the pandemic people will continue to walk and seek out nature in the city, or what Marion Waller has called the natural artifacts that allow for an urban connection to nearby green space. Beyond the High Line, linear parks line the city’s edge in all boroughs. Promenades with bike paths gird the city from the Battery up to Inwood. Access to the water’s edge, and to nature, has redefined New York.

At the scale of the neighborhood, green roofs offer biodiversity. 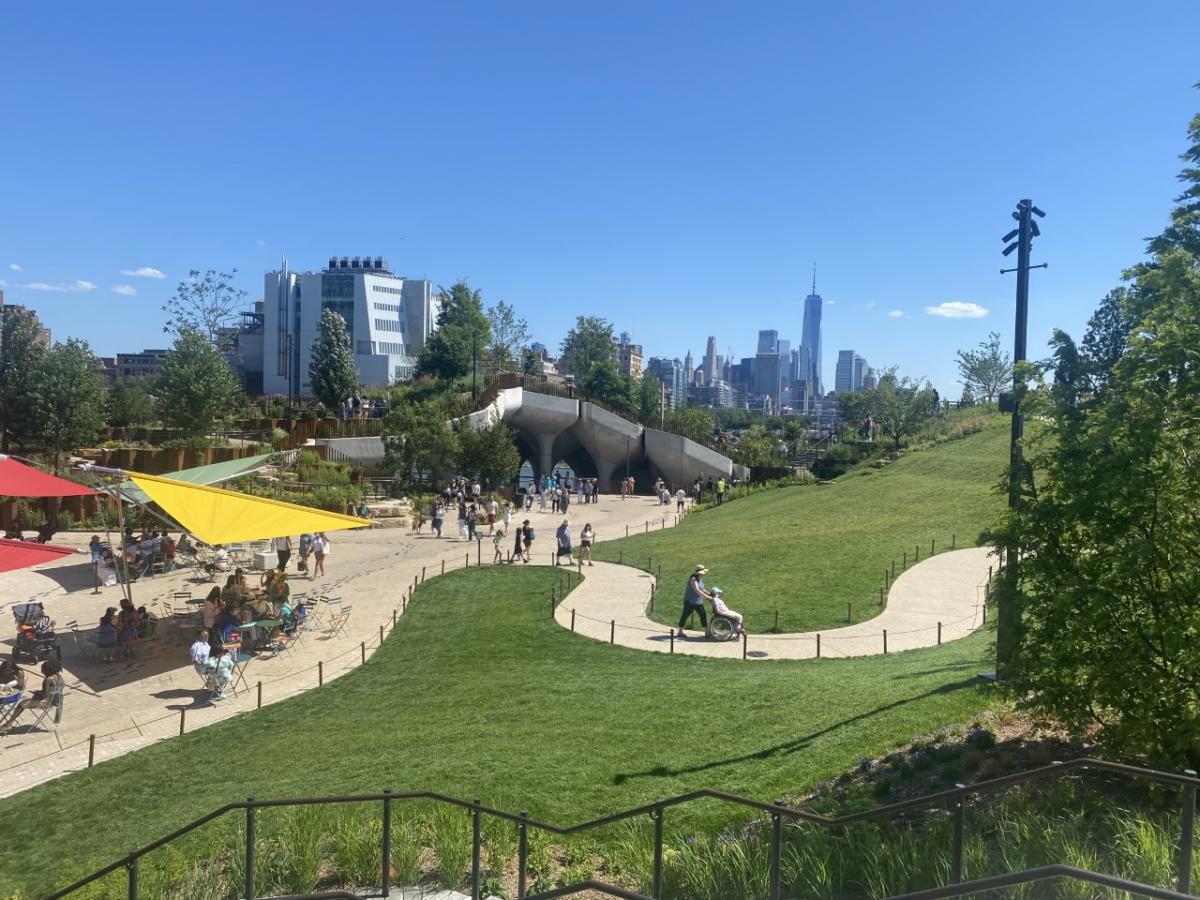 During the first weekend of March, 2021, the vaccination center at the Jacob K. Javits Convention Center performed best in the country, with 27,144 vaccinations given. The recent renovation and expansion tripled building area to nearly six million square feet. It has the largest green roof in the Northeast US, measuring 6.75 acres. The roof absorbs up to seven million gallons of storm water runoff annually, while reducing heat gain and energy consumption by 26%.

Other green roofs throughout New York City, including that at Brooklyn Grange in Long Island City and at Via Verde in the Mott Haven neighborhood of the South Bronx have been precursors of a burgeoning urban agriculture movement. Brooklyn Grange nourishes its community, promoting sustainable living and local ecology through food, education, and events. Its flagship farm, which opened in 2010, has 43,000 square feet of tillable area, making it one of New York’s largest rooftop farms. It grows tens of thousands of pounds of produce every year.

During the pandemic, residential rooftops across the market spectrum became communal space, allowing New Yorkers to escape the confines of small apartments and the cabin fever of the lockdown. This will continue, with amenity space and urban farms in both market rate and social housing. In addition, one can imagine accessible rooftops on a wide variety of public buildings. Access to rooftop green space has changed the perception of New Yorkers about being outside.

At the scale of the block, community facilities are beacons. 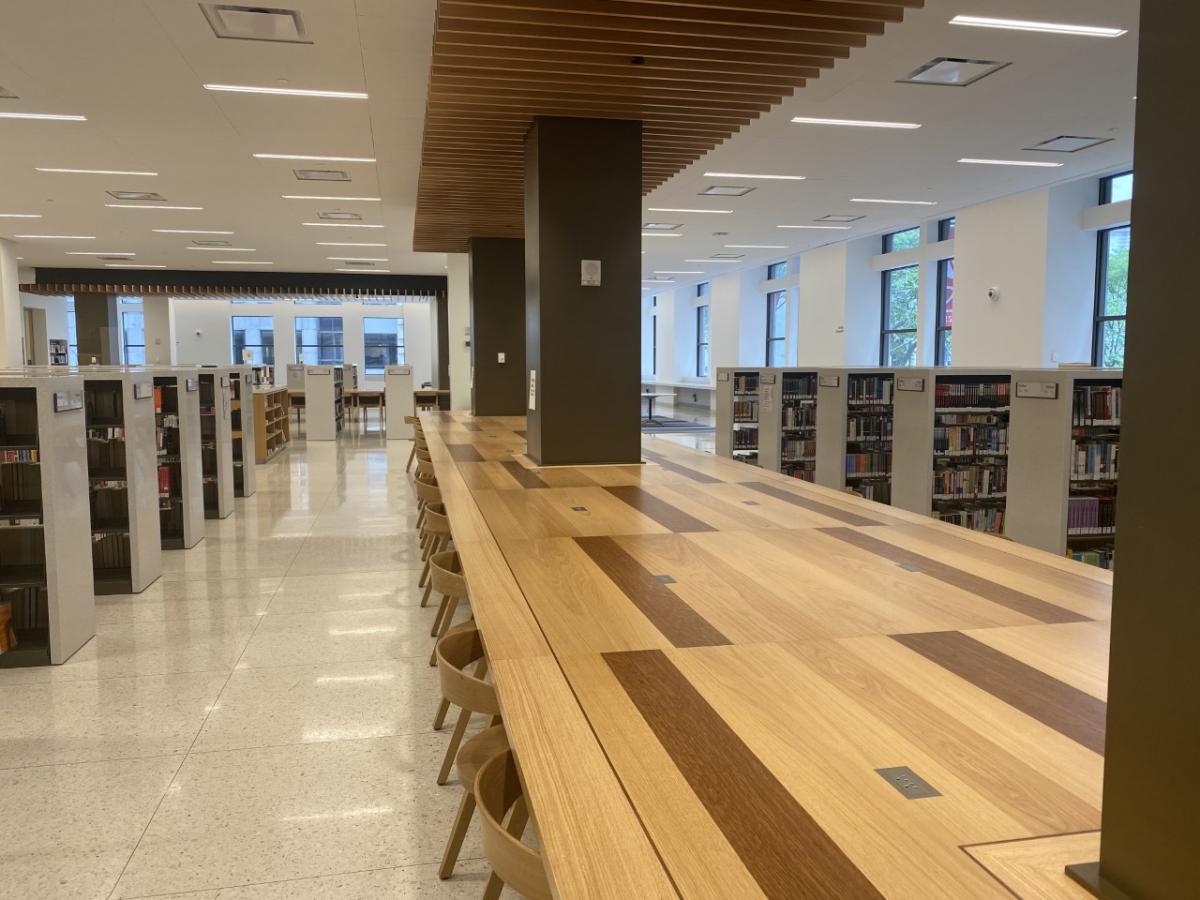 The Mid-Manhattan Branch Library, New York’s largest circulating library, re-opened to the public in June after a $200 million renovation. Renamed the Stavros Niarchos Foundation Library, it has a new rooftop terrace looking toward the Carrère & Hastings main branch across the street. The four-story atrium “great room” reveals the open stacks. Supersized tables engage the structural columns and harmonize with the Thomas Moser chairs as well as the wooden ceiling baffles.

What is most interesting is not only the skillful conversion of a crammed cacophony into something elegant and appealing, but also the prior adaptive reuse of the Arnold Constable department store into the Mid-Manhattan Library initially. It is not the only former midtown retail palace transformed by the NYPL. The Science Industry and Business Library (SIBL) occupies part of the former B. Altman emporium. If former department stores can be transformed into libraries serving new users, can suburban shopping malls be far behind? The pandemic played havoc with the hours of operation of community libraries everywhere, with materials sometimes provided outside. The evolving role of libraries as community centers is still best represented by the street-facing open courtyard of the Langston Hughes Community Library and Cultural Center by J. Max Bond Jr., completed in 2000. That library, and others like it, provide information on health services, immigration, vocational training, computer skills and English as a second language. Access to information in a welcoming facility helps overcome disparities in opportunity.

At the scale of the building, parklets abound. 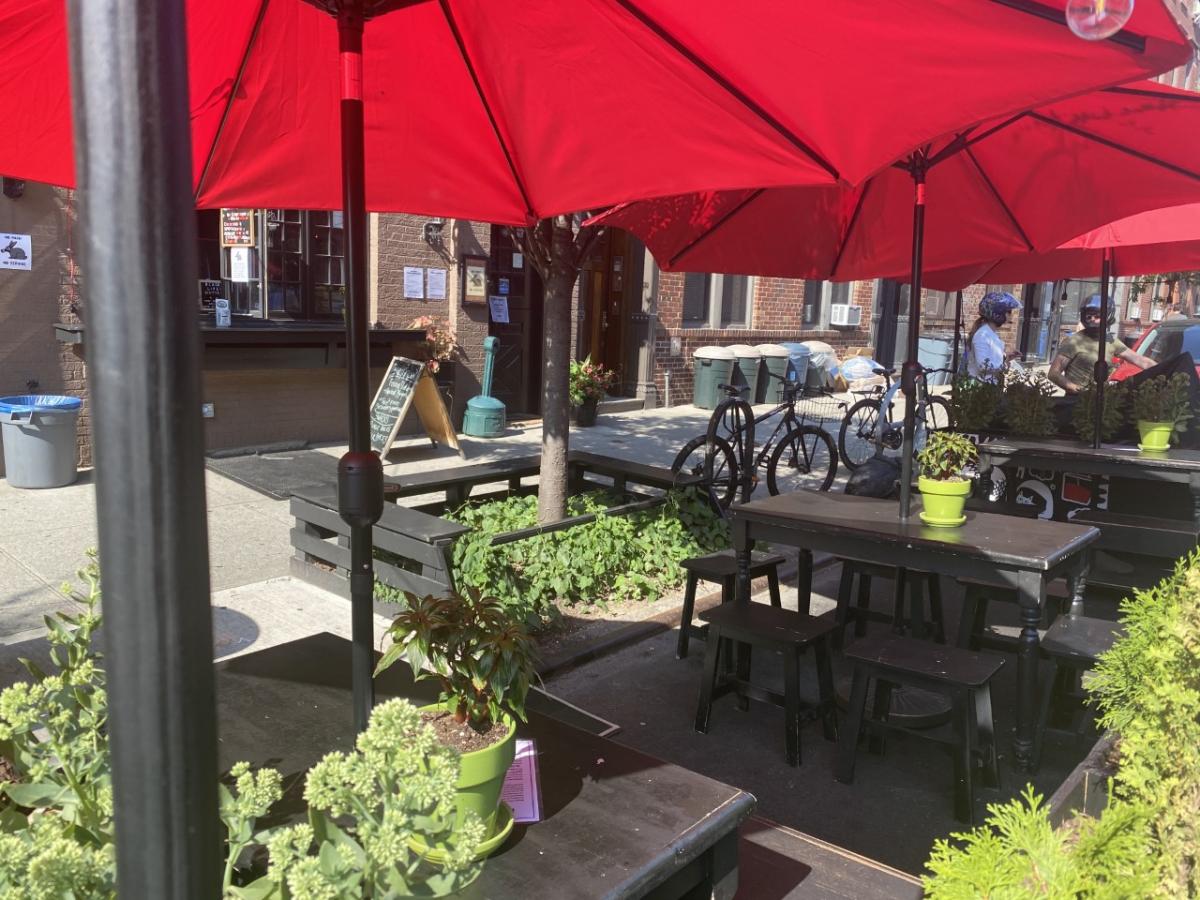 The Black Rabbit is a mid-block bar and restaurant located on Greenpoint Avenue in Brooklyn, a principal thoroughfare connecting the rapidly gentrifying neighborhoods of the ethnically diverse East River waterfront of Queens and Brooklyn. Created out of a non-descript storefront in 2007 by Anne and Kent Lanier, the bar features dark wood millwork and defined booths affording a degree of privacy, pre-pandemic, by louvered swinging half-doors. A planted rear garden attracts Greenpoint residents, old and new, and provided some seats during the COVID-19 debacle that saw many other neighborhood bars go under.

During the cold winter of coronavirus, the bar owners analyzed how best to add outdoor seating and use plants as space dividers in the rear yard, the sidewalk, and the parking spaces able to be occupied. Other restaurants and bars around New York faced the same challenges. Issues of space heating and bottled gas storage were confounding. The Black Rabbit survived, thanks to the street-friendly attractiveness of what Anne and Kent accomplished. The question is often asked about whether the street seats at the Black Rabbit and similar establishments will remain when the social isolation regulations fade into memory. The answer is resoundingly positive. New Yorkers like to eat outdoors. Who knew? The balance of inside and outside has forever changed. Out is now in. Access to additional public space for enjoying open air dining – or just hanging out in the street – has become the new norm. Form follows luncheon.

Rick Bell, FAIA, teaches at Columbia University, where he also helps animate the Center for Buildings, Infrastructure and Public Space. Rick will also be speaking at this year's Lisbon Festival.