Because he is a Classical architect, and proud of it, Robert Adam has never been everyone’s cup of tea in the UK profession. The style wars of yesteryear are far from over, even in an age where pluralism is increasingly the norm. Ideas about what constitutes ‘contemporary’ design frequently exclude Classical buildings, even if they were designed this year. The very word now carries overtones beyond the strict dictionary definition. 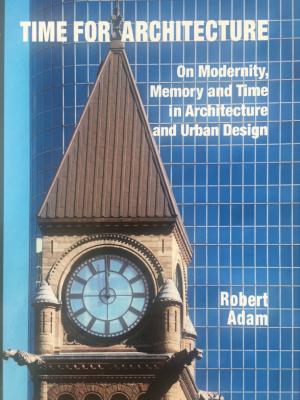 However, throughout his career, Bob Adam has connected with architects of a different stylistic persuasion over areas where common cause is to be had. For years, he campaigned with the Modernist former RIBA president, Michael Manser, for reform of planning laws which stood in the way of well-designed development.

As a member of the Commission for Architecture & the Built Environment design review panel, he showed admirable impartiality in his appraisal of designs which, while clearly not to his personal taste, were nevertheless capable of objective comment. Like all good reviewers, he could acknowledge design skill where it was evident.

His many contributions to public discussions on tradition and meaning in architecture have helped to inform his book, Time for Architecture (Cambridge Scholars Publishing), subtitled ‘On Modernity, Memory and Time in Architecture and Urban Design’. This looks like his last word on these subjects and is clearly the result of years of reading. Though he is not an academic, the book is heavily footnoted. It is not a picture book, but there are more than 100 black-and-white images and drawing, well chosen to illustrate the multiple points being made on a range of related subjects.

Time, change, modernity, custom, vernacular and memory come under the Adam spotlight, leading to some final comments on what is called the ‘paradox of tradition and modernity’: a paradox not least because Modernity with a capital ‘M’ of course now has its own traditions and history.

I would like to have heard a bit more about what Adam himself thinks on some aspects of the issues discussed, since many statements in the book are justified by reference to some other commentator/philosopher/academic. One and a half pages (in large print format) discussing ‘the fallibility of history’ includes quotations from seven different authorities. None of the comments really justify the section heading, merely reinforcing the conventional view that history and memory are not the same thing. Whoever said they were?

However, the authorial view is loud and clear on many issues, including the contradictions and intellectual dishonesty surround some elements of the world of conservation, tradition, and public protection. He is catholic in his choice of sources and is just as likely to cite Aldo Rossi in support of his thinking about collective memory, for example, as to more traditional architects.

In short, the book is a breath of fresh air, with occasional witty asides: there is a ‘Timeless Architecture Award’ given by the American Institute of Architects, ‘although only to members from Pittsburgh’. The opening chapter is excellent on the near-fraudulent claims made by architects about their own work, and organizations who claim their awards are for timeless design. These claims are undermined by images of Michael Graves’ Denver Public Library (1990) and Toyo Ito’s Porta Fira hotel in Barcelona (2010), both said to be timeless, but both already looking distinctly dated.

By contrast, Adam cites a WAF award winner from 2017, Irving Smith Architects’ ‘Back with two roofs’, which won the Villa category. Here, a work which is in the tradition of the Mies Barcelona pavilion of 1929, won an award ‘from important judges from the international architectural community, proof enough that this is a form, or an expression with which this community identifies’.

Needless to say, there are other communities and other traditions, and the question Adam poses is which traditions architects and urban designers choose to express; his regret is that frequently there is so little alignment of overlapping traditions in the approach adopted by design professionals.

This is reflective book rather than an angry polemic, and all the better for that. For students as well as the qualified, the questions raised and arguments made are rewarding; where provocative, they are for constructive purpose.