Oxford, as Evelyn Waugh recalled his undergraduate days through the rose- tinted lens of Brideshead Revisited, was a city of aquatint, writes Jeremy Melvin. It might be more appropriate to think of it as a city of paradox. Its ancient university reeks of unearned privilege, yet it has also provided a leg up the social scale to students – not least Waugh himself, but also to Cardinal Wolsey, H H Asquith and Harold Wilson. Its traditions go back almost a millennium, yet Oxford has also fostered – not consistently throughout its history – some of the most advanced thinking which has helped to shape the modern world. And what is perhaps its most obvious physical characteristic – its beauty – carries all manner of paradoxical connotations.

The aspirations for the William Doo and Lee Shau-kee buildings, designed by Amanda Levete Architects for Wadham College, are to be both familiar and inspirational in the words of the warden Ken Macdonald. This might also sound like paradox, but as he goes on to explain, by achieving their purpose they turn an apparently paradoxical condition into coherent experience. As an ‘access centre’ to welcome prospective students and a student centre for undergraduates, that intention reflects the college’s longstanding mission of broadening access to the university – explicitly to offer inspiration without it seeming unfamiliar. 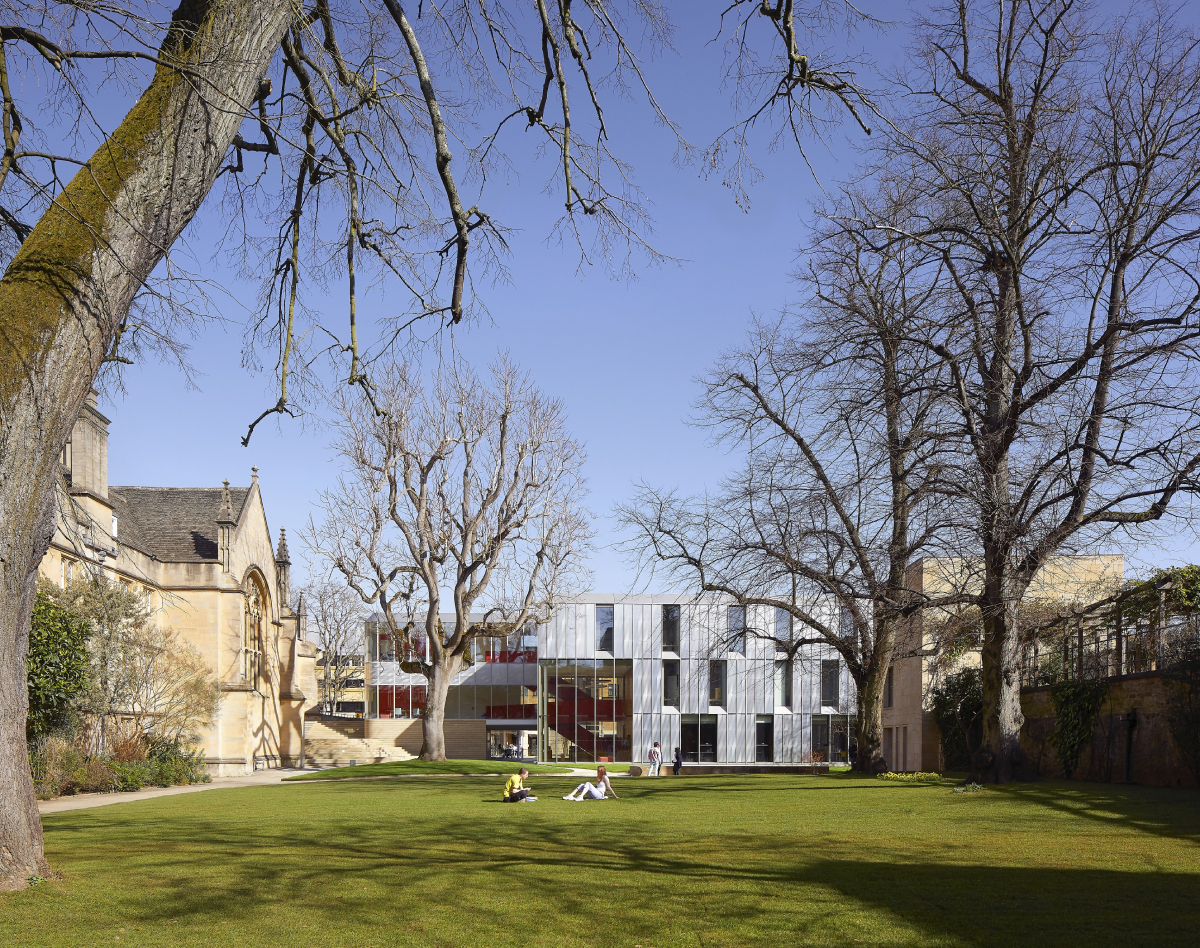 Since the wardenship of Maurice Bowra (1938-70), thought by some to be the model for Waugh’s sycophantic, social-climbing don Mr Samgrass, Wadham has been at the forefront of attracting bright students whose backgrounds might have made Oxbridge seem an unrealistic goal. Bowra, explains Macdonald, ‘encouraged the fellows to take genuinely clever young men from the state schools’, rather than those ‘from public schools who weren’t clever enough to get into Magdalen or Christchurch’. The result was an almost exponential rise in the college’s academic record as it tapped into an intellectual resource largely overlooked in the rest of the university.

Since other colleges and the university in general have followed Wadham’s lead, this goal is no longer unusual. So the Doo and Lee buildings seek to place the college again in the vanguard, both symbolizing and facilitating the delivery of a process for familiarizing students with this rarified environment which starts before they apply and continues after they matriculate.

The experience and a great deal of the efficacy of this process depend on architecture. Across the college its overriding tone is Jacobean, with its foundation in 1610 by the wealthy widow Dorothy Wadham, who topped up with some of her own inheritance the endowment provided from the substantial fortune of her husband Nicholas. The new buildings are approached through a discreet archway in a corner of the main quad, which echoes Evelyn Waugh’s ‘low door in a wall… which opened on an enclosed and enchanted garden…’ through which the middle-class Charles Ryder metaphorically passes to his first meaningful encounter with the aristocratic Sebastian Flyte. 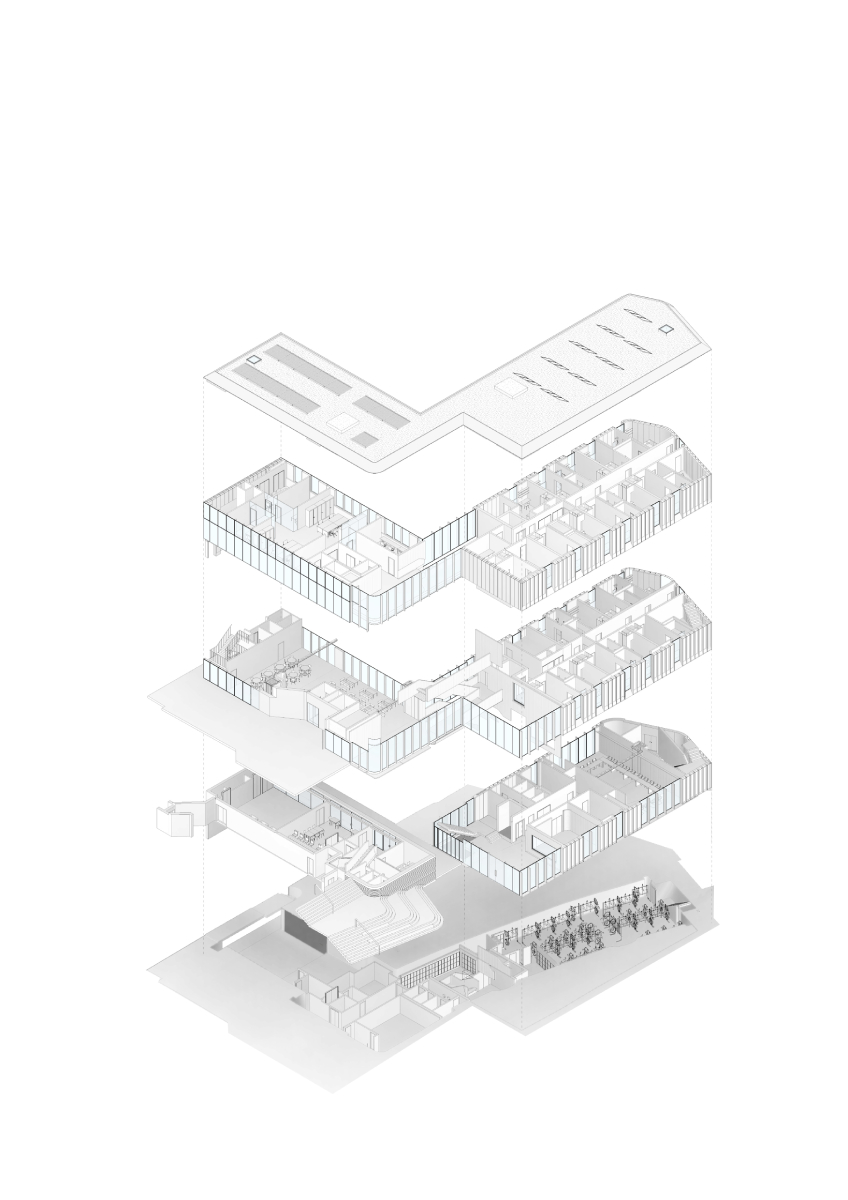 This low arch reveals a shimmering, subtly-coloured glass and metal façade, rising on a stone base from the greensward. Its appearance alters as sunlight turns to shadow and reflections of clouds and sky flow across the surface, unlike the soft stone of the older buildings, though stained glass windows in the hall hint at polychromy. This may not be an entirely familiar vista, but it is intriguing and easy to read: a strongly red staircase appears through what is obviously an entrance and suggests how you might move into and through the buildings. 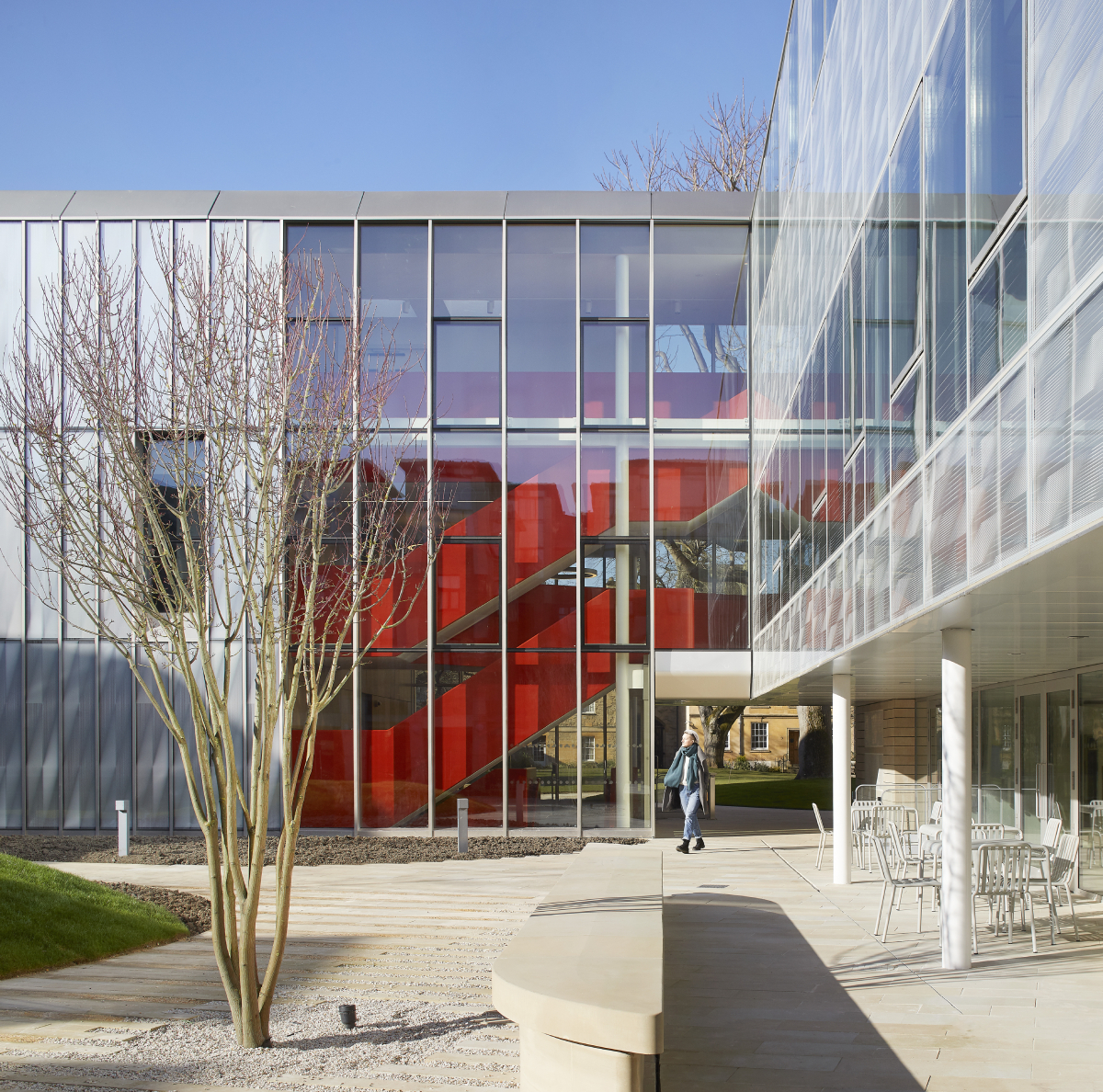 The student centre to the right, looking through to the back quad with a glimpse of the house that might be, but probably wasn't design by Wren. Note the red staircase and the subtle frit and coloration of the facade.

Introducing these very different sensations allows the new composition to indicate a spirit of innovation that might morph into inspiration. And as the reflections on the new façade expand to include the neighbouring buildings, it seems increasingly appropriate to its place. Macdonald mentions that the overwhelming view of the college’s governing body was to ‘commission an excellent design and not a pastiche’. It replaces the dowdy, post-1945 Goddard building, whose crescent shape divided the back quad and squeezed a flight of stairs – the main route to the library – into a narrow channel to the side.

Apart from the economically shrewd reuse of the existing foundations, albeit severely stretching the ingenuity needed for the design of the new structure, the new buildings have nothing to do with what they replace. They form an L-shape which defines a small quad into which the student bar spills, then widen the route to the library with an inviting flight of steps which incorporate several benches. This leads to the previously hard-to-access library terrace and to the upper floor of the student centre, which can open internally and externally to form a party space, or sub-divide into smaller entertaining or meeting rooms. Above are admin offices. 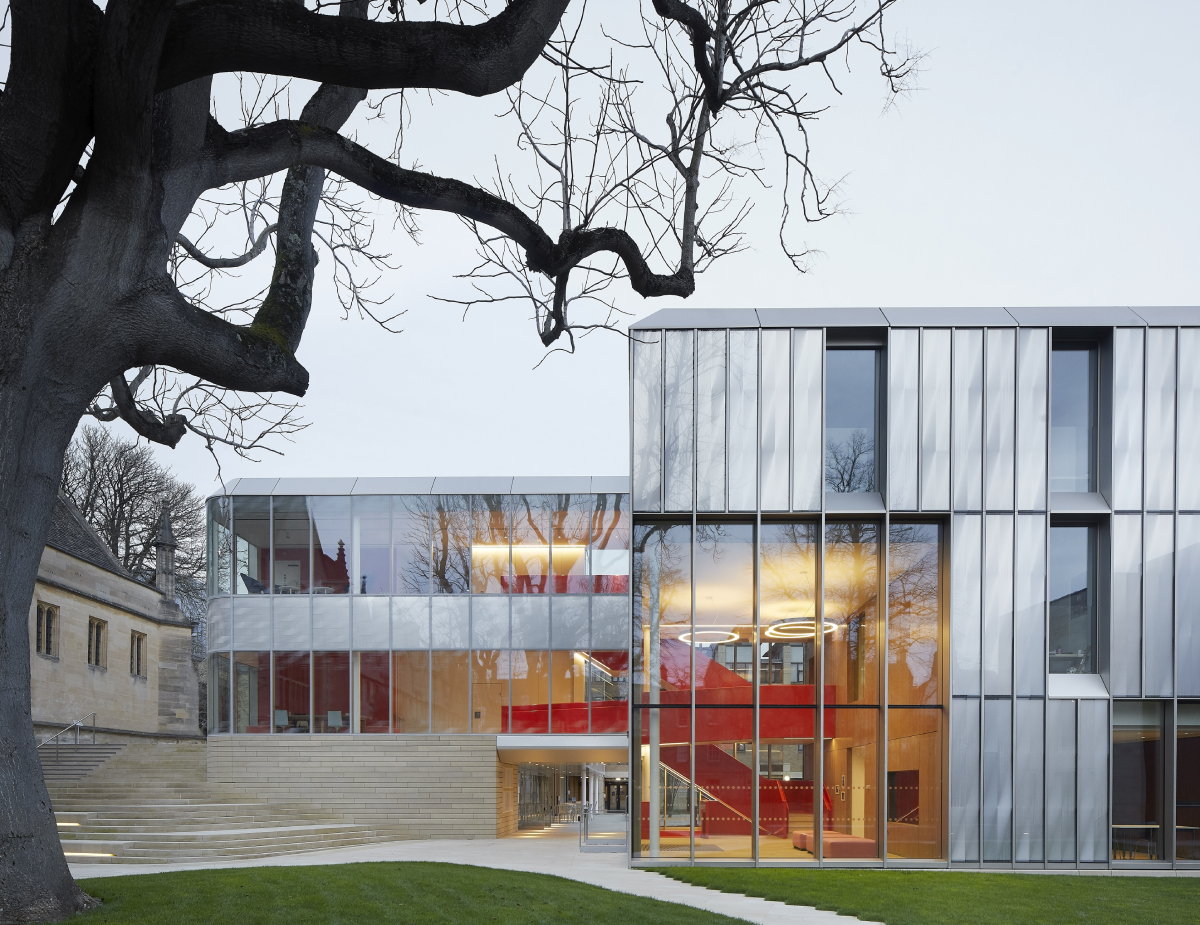 The stairs invite ascent, with the possibility, for the respiratory challenged, of a rest on one of the steps which doubles as a seat.

The access centre, at right angles to the student centre, has a generous two- storey entrance foyer with the red stair. On the ground floor are a piano room and more spaces which can be configured for different requirements. Here school pupils can be introduced to the possibilities of studying at Wadham, and in theory at least the contemporary feel will be less intimidating than Oxford’s more traditional gothic or classical architecture. It will certainly seem more familiar to a generation brought up with iPhones and virtual reality, though, one suspects, with just enough unfamiliarity to inculcate the idea that studying at Oxford is neither an automatic right nor a walk in the park (though it may well involve multiple strolls in the grounds). 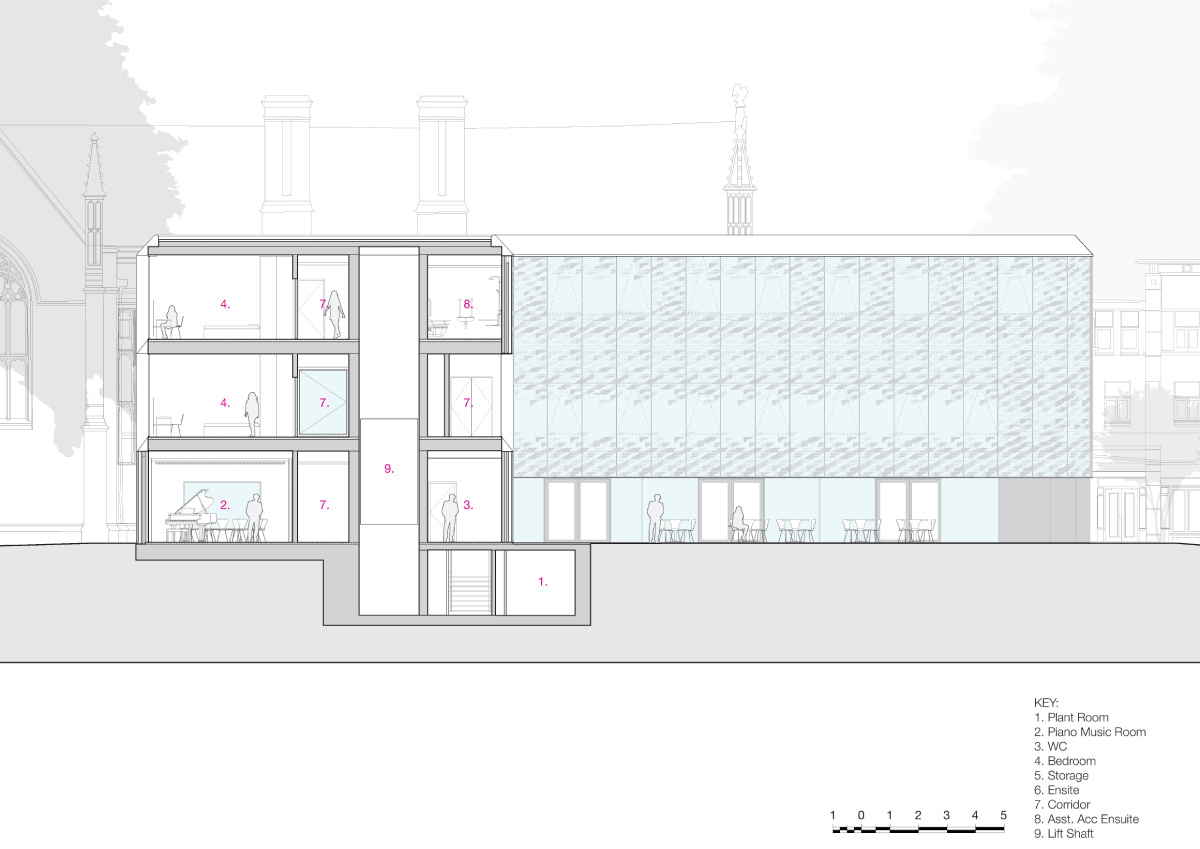 Section through the access centre with student centre elevation

On the two upper floors are study bedrooms, where prospective students might stay but will be in regular use by enrolled students. These rooms, cenobitic rather than sybaritic, have en-suite showers and simple but attractive opening windows, have privacy blinds and incorporate benches for sitting or spreading work. All are fully accessible and some, a first for the college, can accommodate students with very limited mobility and a carer. This is part of the remit to treat accessibility as a holistic challenge.

Lining the back quad are the high table end of the hall, are the convex curve of the Holywell Music Room – England’s oldest purpose-built concert hall, and most significantly, Richard MacCormac’s Bowra building for student accommodation with a Gillespie Kidd & Coia library to its side. On the other side of the new building, around a lawn centred on a magnificent tree of heaven, are a recent graduate student centre, the ‘elephant gate’ – a historic portal through which all the construction traffic had to pass – and a house ‘thought to be designed by Wren but probably not’, according to Macdonald.

The architecture embeds a sense of ideas and practices which change over time, which itself parallels college history. Its founding funds came from extensive landholdings – Nicholas Wadham came from an old family of Somerset gentry and owned almost 30 manors – but as the first female founder of an Oxford College from neither the Royal Family nor the nobility, Dorothy was breaking new ground. Moreover, her grandfather was a tanner, while her father, William Petre, advanced himself via an Oxford education through the Tudor administration to become Secretary of State to Henry VIII, Edward VI and Mary I. While the source of funds may have been traditional, the circumstances of the founders point to social mobility.

To build the new college she turned to a Somerset connection, the mason William Arnold, whose workforce walked to Oxford from Somerset and built the main quad in the short time of three years (1610-13) – all the more remarkable because it is reputed to be the last major building in England built using the mediaeval masonic model. Already, at least at court, Inigo Jones was initiating indelible change to English architecture, but far more significant, for Wadham and wider intellectual life, was the arrival of John Wilkins as the college warden in 1648, a generation or so after its foundation. 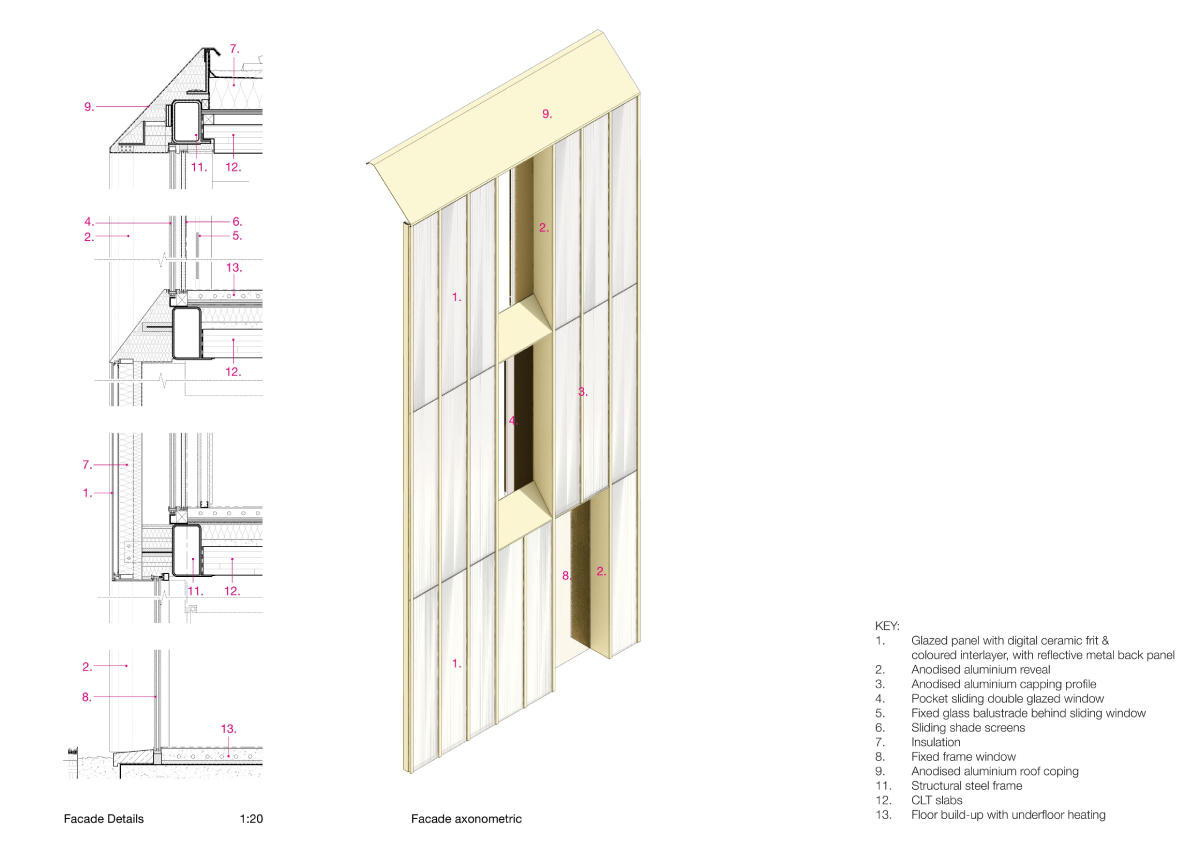 Wilkins gathered from across Oxford a formidable group of intellects who would go on to found the Royal Society. Meeting in his warden’s lodgings to discuss scientific problems, the group included Robert Boyle, Robert Hooke, John Locke, William Petty and Christopher Wren, who was an alumnus of Wadham and returned as a fellow when he became Savilian Professor of Astronomy in 1661. (For more on this remarkable group, see my Wren Memorial lecture here). By then Wren had already made a decisive break with mediaeval building practices by using his skill as a mathematician to calculate how to span the width of the Sheldonian Theatre with a shallow rather than steeply pitched roof. The mathematical physicist and Nobel Laureate Roger Penrose, an emeritus fellow, continues the scientific tradition.

Struck by the vibrant visual effect of the shadow and brightness across masonry facades with finely carved ornaments, the Levete team investigated the idea of complementing such effects using contemporary materials and construction techniques. The new facades are in effect glass curtain walls, but each pane of glass has a frit which gives texture to the surface, breaking up its reflectivity. Behind the glass are aluminium sheets in a variety of subtle hues, adding an ethereal colour to the already ethereal glass surface. 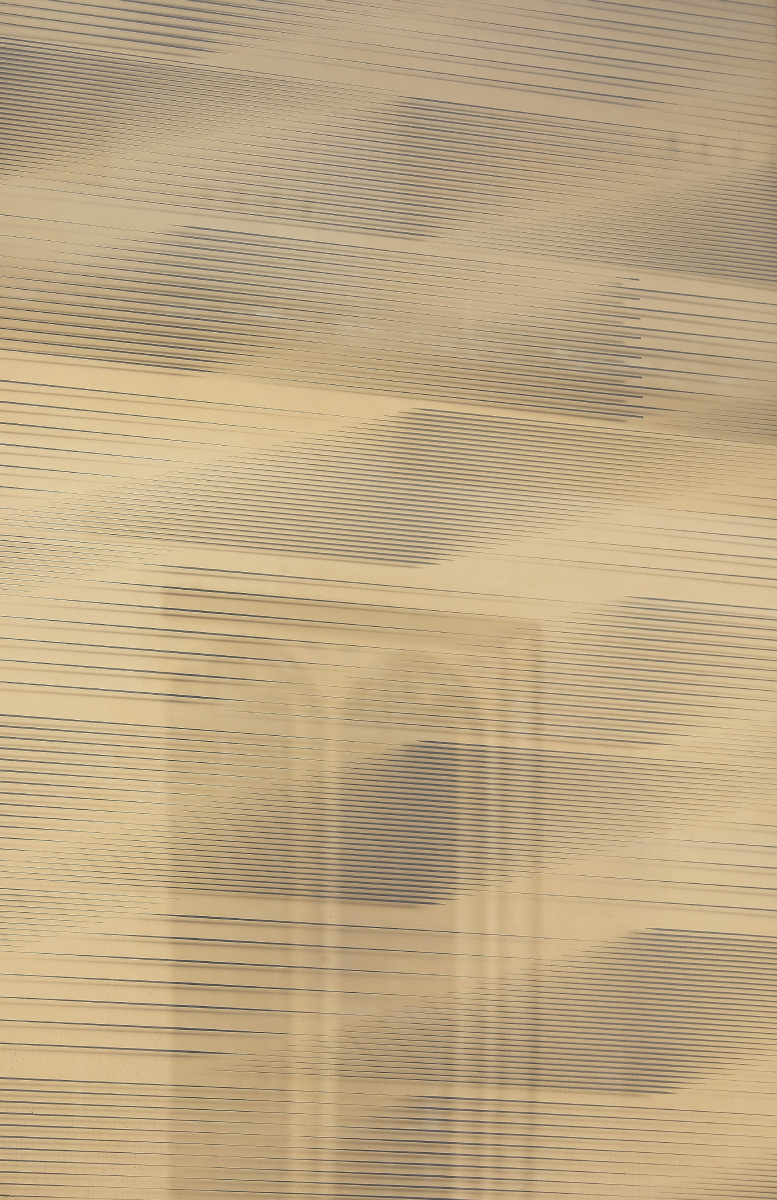 The facades combine transparency and reflectiveness as well as subtle colours and textures, resulting in a sense of depth and space.

All this gives depth and richness to the idea of a curtain wall, which has a tendency to become banal. Here, it does exactly what Macdonald envisaged: adapting and enriching the familiar in a way which is cognate to the remarkable surroundings and their history, but in a manner that makes that history an inspiration for future endeavours.